A Secret About a Secret: A novel 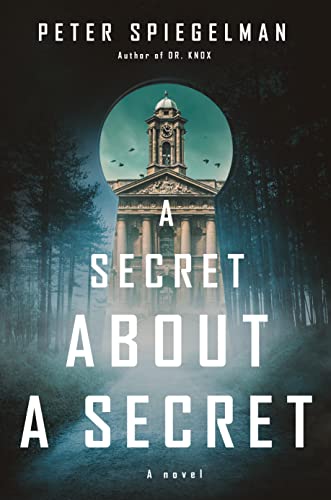 “A Secret About a Secret resonates with the deep melancholy and simmering resentments that classic hard-boiled detective fiction embraces, but with far more grace and beauty.”

Framed powerfully by corporate medical espionage, Peter Spiegelman’s A Secret About a Secret creeps just over the time border, into an era when security forces are both global and powerful—something none of us would be surprised to find in tomorrow’s news. Agent Myles presses steadily forward into his investigation of the death of a significant researcher, methodically gathering data on people and processes in a top-secret lab developing genetic change agents. As the force of his inquiry begins to set off new violence, deceit and danger pop out of the mental and actual caves around him.

But Spiegelman’s magical writing invites a deeper connection both with the landscape of this unusual police procedural and with the grim sense of despair that the security force, known simply as Standard Division, can evoke through its enormous power. Begin with the land, which might be Britain or might be the Netherlands or even Belgium:

“The road was long and secret: a tunnel of trees that leaned overhead and wept like mourners in the wind. It ran beneath iron skies, past vacant fields and the lichen-crusted stones of ragged walls. It ran past a farmhouse, dark and empty, and through a stone village with few lit windows and no signs that named it. It ran on then towards the coast, and even in the hermetic car I smelled salt and rotting seaweed.”

Though Myles reveals only the bare bones of why he identifies with this landscape, his personal losses are clearly painful and grim. He meets the investigation with the tarnished sorrow of a George Smiley gone “private”—“If nostalgia was called for perhaps, or distraction, equivocation, worry, longing, or bone weariness, then I might be useful.”

The killing he’s got to pry apart—yes, it’s clearly murder—is of a star scientist at Ondstrand Biologic, Dr. Allegra Stans. Is the motive connected to her discoveries, or those of the scientists around her? Could it be personal instead, since she had a free and easy sexuality that shifted among the people around her and even “off campus” at times? When blackmail-style pressures also emerge, they almost disguise the underlying treachery that has made the circles-within-circles dangers and betrayals so persistent around Dr. Stans.

Spiegelman’s plotting and pace are flawless, and his interludes of heightened language raise the tension. Canny readers will carry the haunting of the book’s epigraph into their explorations: It’s from Diane Arbus, saying, “A photograph is a secret about a secret. The more it tells you, the less you know.” And, as with John Le Carré’s George Smiley, the rot that the investigation uncovers sets off a dismaying and heart-breaking echo in the otherwise impersonal and forceful Agent Myles.

A Secret About a Secret resonates with the deep melancholy and simmering resentments that classic hard-boiled detective fiction embraces, but with far more grace and beauty. There are passages that can haunt, all on their own, like the description of a beach as “bleak and beautiful as only empty beaches can be in gathering darkness, in chilly air, in an off-season,” or “her pale, paint-stained hands and slender white feet floated in the darkness like a ghost’s appendages.” This all adds up to the one complaint likely for this compelling novel: Somehow, it ends too soon.