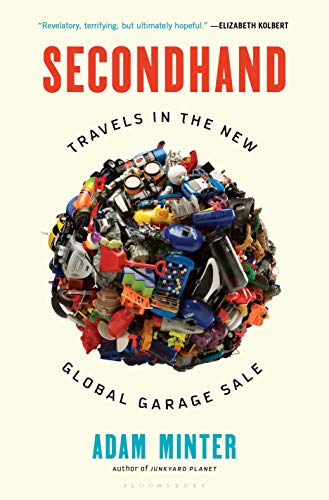 “Secondhand tells an important story about consumerism gone wild, the complex industry that has grown around its detritus, and how we can push back on an entrenched culture of disposability.”

The affluence of the rich global north has supercharged the consumption of goods. Not only do we consume those material goods with alacrity, we also throw them out with equal dispatch. We are awash in stuff in a disposable world. The sad truth of this is that only a small sliver of what we recycle makes it back into new products, another slice is repurposed, and some is reused as a secondhand item. The rest gets dumped.

In the past, goods were constructed with quality in mind and meant to be fixed. They were also relatively expensive so people kept them. Take, for example, the oldest known pair of blue jeans—1879 Levis. Then, denim was heavy, stiff, and a deep, dark indigo. You could only break them in over impressively long stretches of time, as the fabric became imprinted with wear marks etched into them by their owners’ repetitive movements. Those old jeans likely had several owners. They were passed around, worn for three or four decades, and became enduring, embodied garments.

Secondhand outlines the transformation from durable to disposable. It tells the stories of how stuff moves through a system of use, reuse, and discard. In the post WWII era, Americans bought bigger homes, made more money, and gained access to credit. These factors allowed for the accumulation of goods over a lifetime. People of my parent’s generation treated their goods as if they were heirlooms. For them, wealth, status, and identity was bound up in their china, silver, antiques, furniture, and knicknacks. Today, no one is really all that interested. As Minter underscores, “for many Americans, objects packed into a home present the complete curated package.” When their owners die, they become mausoleums of consumerism. Value, as it turns out, is a generational cultural construction.

But what of those curated homes filled with stuff no one wants? Clean-out companies have sprung up that specialized in hauling off these lifetimes of accumulation. If the business has some vertical integration, it might also have a store that sells the best of what is discovered. The sorting process is course grained, for most clean-out jobs happen quickly and then it is on to the next jam-packed house.

The book has two great strengths. The first rests in its careful research coupled with an almost ethnographic sensibility. Minter immerses himself in the places and people who provide the social lubricant for the flow of reused material across the globe. We hear their stories and get to know them with some intimacy. The second strength is its cross-cultural and comparative orientation. We see how the secondhand business works itself out in places like Canada, Japan, Mexico, India, China, the Philippines, West Africa. Not surprisingly, discards from the rich north become the prized goods in the poor south.

China provides a particularly ironic case with its emerging affluence coupled with its noteworthy manufacturing prowess. For example, in the world of “fast fashion,” an American may wear a garment six or seven times. In China, it may be three times. China, once a consumer of the rich north’s discards, is now an exporter. The recycling bin becomes the de facto garbage can with its veneer of social consciousness.

As Minter notes, cheap, mass produced goods from the poor south translates into disposability rather than any durable quality. It is a pernicious cycle where the rich send their castoffs to the poor. As the poor gain wealth, they want better castoffs. Eventually, if enough affluence builds, once-poor countries become less-reliable markets for secondhand goods. They want new stuff, too.

All this mass production in the poor south comes at a tremendous environmental and human cost. The hidden cost of production—or externalities as the economists like to say—come in the form of pollution, exposure to hazardous substances, labor abuses, and the list goes on.

Toward the book’s end, Minter outlines two policy proposals that would address the challenge of disposable material culture through the reassertion of the notion of quality and durability as a consumer right to know and act.

First, Minter argues for “Lifespan Labeling” on consumer products. He notes that research shows that products that are labeled and have longer lifespans than their competitors sell better even if they are higher priced. Turning this argument on its head, he further argues that this is also reflected in the secondhand market where durability is also valued over more limited-life alternatives.

Second, he champions establishing a law that would ensure a “Consumer Right to Repair.” That is, products would have to be repairable; companies would have to post information on disassembly and repair for their products; and companies would also have to sell the same parts and tools for repair to consumers and third-party repair shops that they provide to their authorized service centers.

We see both of his proposals playing out in the mobile phone market where the cost of an upper-end phone is in excess of US $1,000. Not surprisingly, consumers are hanging onto their phones longer. Consequently, they are demanding longer lifespans and easier, cheaper repairs. Companies are slowly beginning to acquiesce to those demands even if it does not fit the kind of closed business model you see associated with tech giants like Apple.

Secondhand tells an important story about consumerism gone wild, the complex industry that has grown around its detritus, and how we can push back on an entrenched culture of disposability. Our current cycles of production, consumption, and disposal are clearly highly unsustainable. Hopefully the book will make readers far more conscious, intentional, and reflexive about their consumer-disposer behavior.