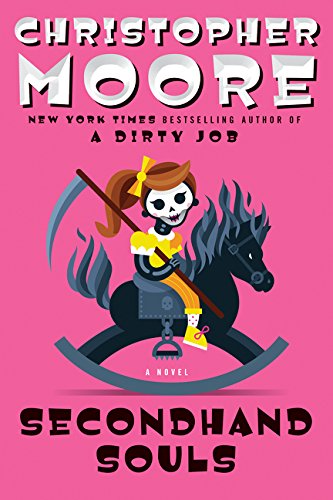 “fun, humor, horror, and a fantastical cast of characters.”

As the book cover says, Secondhand Souls is a “delightfully funny sequel to A Dirty Job.” There is no doubt about that. So quick WARNING: if you do not enjoy sarcasm, satire, gallows humor, and the just plain weird, then Secondhand Souls is not for you.

This novel is out of the gates hilarious with just enough grotesquery to make the reader squirm. Taking place one year after the events in A Dirty Job, Secondhand Souls dives right into the life of the previous novel’s protagonist, Charlie Asher, who now finds his soul transferred into a “knee-high meat-puppet.” Basically, to avoid dying altogether from a nasty encounter with a Morrigan, Charlie had his Buddhist nun girlfriend shove his soul into a vessel that is part taxidermy and part corner deli. With a 14-inch, uh, member. It gets weirder from there.

But that is the beauty of a Christopher Moore novel, the weird is wonderful and the normal seems weird. With characters such as Minty Fresh, Lilly Darquewillow Elventhing Severo (the middle name is silent), The Emperor of San Francisco, and two giant hellhounds named Alvin and Mohammed, how can normality even be attempted? And why should it?

With evil and darkness apparently defeated, many of the characters focus on trying to get Charlie a new body. One that isn’t a foot high with the head of a tiny alligator. And wearing wizard’s robes. But to do so, they need a person willing to die and let Charlie move in as that person’s soul vacates. Not an easy task.

To make matters harder, Charlie former job as a Death Merchant (a collector of souls) is not so former. Souls still need to be collected and, despite his diminutive stature and not even close to human appearance, Charlie is not off the hook. His calendar is filling up with names of people ready to pass on, but he can’t quite do his job the way he is.

Which leads to the perfect set up for a new Big Bad: the yellow man. A new evil that has risen from below to help bring the forces of darkness up into the world and end things once and for all. At least once and for all for everything that is good. He’s a cool cat that wouldn’t mind if evil kept on rollin’. He’d be way into that.

Add in Charlie’s daughter Sophie that is the Luminatus (really big death), the other Death Merchants that are being thwarted at their jobs, the possible return of things previously killed, and Secondhnad Souls has plenty of story, mystery, and thrills to keep the reader’s interest all the way to its perfect climax. Saying more would ruin the fun, which would be close to blasphemy when it comes to a Christopher Moore novel.

While this novel does stand up on its own, it would help to read A Dirty Job first. Then dive right into Secondhand Souls. It is a seamless transition and helped by the reappearance of one of Moore’s perennial characters, Homicide Detective Alphonse Rivera. The advance praise that has come out for Secondhand Souls is well deserved. This novel is as zany, heartfelt, irresistible, and flat out as strange as it is billed.

A great addition to Christopher Moore’s hilarious bibliography, Secondhand Souls does not disappoint as a sequel and stands up as a solid novel filled with fun, humor, horror, and a fantastical cast of characters.