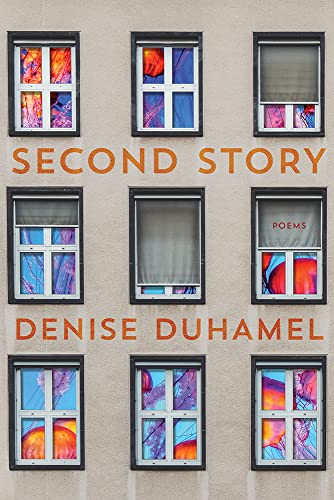 Professor Denise Duhamel is a prolific poet and the author of several books. Women’s subordination, racism, climate change, and social relationships, personal and commercial, inhabit Second Story, containing 36 short poems and one long. Nature, history, metaphysics may touch some lines. Still, most poems fall into what is known as urban poetry, verses negotiating through the chores and impositions of living and dying in cities, crowded and abandoned.

As a feminist, Duhamel is no word-mincer, at times unforgiving. “Hello, all you men, who statistically die first, who whistle by the graveyard full of pretty girls.” There are no exceptions, no good men.” By 1938, “/America established a minimum/wage, but not for hospitality/ workers who were expected to live/off tips. (Translation: Ladies, / shake those tits.)” Duhamel does not worry (and poets are not in the business of worrying) that in condemning male-generated sex-stereotypes, she composes her own about men.

As a literary form, Plato thought poetry is the opposite of philosophy: contradictions that spoil the tenor of philosophy can freshen the sweetness of poetry.

In “Ode to My Father,” the poet’s feminist voice drops to balance, even admiration for “straight man with little patience for irony.” The father is “man with cookies for grandchildren, uncomplicated man, /man of honest answers . . . man of Lent, man of Zen . . . man of patience, man of routine.” Here the love for the father, the man, is as authentic as the feminist critique of men in other poems.

Duhamel is a political poet. Some poems slide into progressive politics, some into name-calling. “The prez calls us THUGS. . . Then he builds a Wall/ ‘Baby gate’ around the White House.” Vengefully, a poem turns on the president, pouring 45 insults, one after the other, with smoldering steadiness: “Fuckface Von Clownstick . . . Rapist-in-Chief . . . Mango Mussolini . . . The Fraud of Fifth Avenue . . . Agent Orange. Creep Throat.”

Some readers might sense a lack of poetic propriety in blatant name-calling, no matter how deserving Trump is as an object of scorn.

“Terza Irma,” the long poem in the collection, recounts Hurricane Irma, “a giant asshole,” that struck Florida, the poet’s home state, in September 2017. This poetic log kept over 14 days, before, during, and after Irma’s landfall, documents fears, feelings, evacuation, the challenges to finding a place to stay, returning home, going back to work, grading papers.

“I fear my windows will blow open . . . my soaked body swollen/for days, no medics able to get to me . . . I’m hiding away/my Birkenstocks in the dishwasher . . . it’s a condo’s only true water-/proof space.” The association of existential dread with the footling captures the essence of the human mind that swings randomly between the sublime and ridiculous even in danger.

“Over six million Floridians/escape with us, cars squeezing/into lanes . . . I took my laptop, medicine, /and passport, foregoing love letters.” The bonds with material things, beneficial and emotional, compete among themselves as the forced evacuees choose what they will take and what they will ditch. The practical overpowers emotions embodied in snapshots, scrapbooks, teddy bears. The choices are heartrending.

Amid misery, the affluent and the resourceful have options that the poor do not. Most relevant to natural disasters, this core theme does not inform the poem, except by implication. “There’s a luxury house . . . The price/ is outrageous, but we are desperate . . . Cindy and I order Brussel sprouts/with garlic. Oyster Rockefeller/for John.” The poem says little about the unfortunate victims of Irma, the minimum-wage earners, who, stranded in cars without gasoline, could not even imagine “a hot meal . . . suntan lotion . . . Wi-fi.”

Even some non-Irma poems catalog the shenanigans of the privileged, though with hidden sarcasm. On a college night out, Jeff throws “a book at a storefront window, setting off the alarm . . . I was woozy from the sake which I gulped/not knowing it was supposed to be sipped . . . The policemen shook their heads—no ticket/no brutality/no arrest . . . Here’s where I should mention my friends/and I were all white.”

By contrast, some poems register the dangers that non-whites face daily in “America’s vile blind/Spot.” “Last May, at dawn, / Police shoot Dominique Clayton, remind-/Ing us it’s not safe to sleep while black.” “His last minutes, George Floyd called/To his momma.”

The COVID-19 summons a few poetic observations. “I saw the best minds of my generation (i.e., Fauci, Birx) undermined.” “My mom says the nurses dress like astronauts/in protective layers so they’re overheated.” No discussion of the pandemic is complete without noticing the scarcity of toilet paper, and “My Clorox wipes are almost all gone/and there are no more to be found in stores. . You can use flannel for toilet paper if you have to.”

Humor is part of Duhamel’s poetry. The serious and the nonserious intricately intermesh in phrases, lines, thoughts, even in an entire poem. “I floss the steak/out of my teeth.” “O yoga, vitamins, word/games galore. O meatless diet, good ‘fats,’/ pap smears. I am too old to die/young and leave a good corpse.”

Duhamel is a poet who operates on the perceptual level, seeing, touching, smelling reality. Deep thoughts are left alone. Here and there, however, metaphysics bursts out of ordinary observations. Among the short poems, for example, “Facelift” offers a captivating insight into life. “We are not tree leaves. / We do not come back/after winter’s death. /The spring belongs/to someone else.” Unfortunately, even the same tree leaves do not come back.

Duhamel is an accomplished poet bearing good instincts and technical skills, and all she must do is keep writing poetry as it occurs to her.