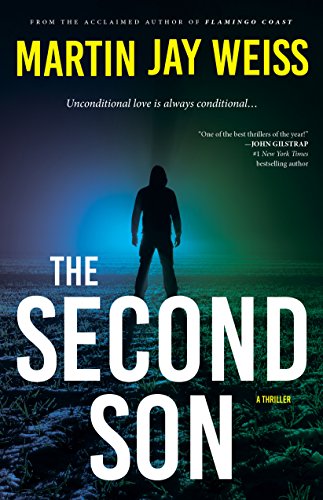 A debut thriller is always an adventure—has the author been secretly practicing the craft of tight, suspenseful writing, so that the plot will make sense, the pace will force the pages to turn, and the characters will be memorable? Or will there be small gaps in means and motive and opportunity, or flaws in dialogue, or accidental mismatches?

Fortunately, Martin Jay Weiss is far from the usual debut author. Under the name Marty Weiss, he’s already an accomplished filmmaker and director, producing award-winning commercials. Translation: He can set a scene swiftly, raise the ante, and make it work.

So Rare Bird Books didn’t just snatch up his debut—this independent California press grabbed both The Second Son for this season, and Flamingo Coast (not a sequel) for next year. That’s great news.

Start with the risky and exhilarating business of a California tech entrepreneur. “Stalker,” owned by brothers Ethan and Jack Stone, isn’t quite ready to go fully public. Its facial recognition software still has glitches. But the pressure from their CFO (chief financial officer), Bailey Duff, keeps escalating. There’s not much the brothers can do to rein in that pressure, since it’s coming from an anonymous financial “angel” who refuses to give the team its next dose of funds unless Stalker launches immediately.

So the tradition of “first death, first chapter” in many a thriller becomes, instead, a premature birth of an app. At the same time, Ethan Stone’s life decomposes in a matter of hours, as his brother Jack, who’s his twin, announces an immediate departure to go work for the competition. The two have never been significantly apart. How can this happen?

And when Ethan gets home, the other intimate part of his life turns upside down, because his live-together-girlfriend, his beloved Brooke, has left him at the same time. How can this happen? Have his brother and his heart’s desire somehow bonded in a way that’s stolen them both from his life? Will his venture-capital-funded tech firm collapse as his private life explodes?

Even so, Ethan’s awareness of what’s really going on hasn’t really started. What’s the real connection that Brooke has with her own business, the Dancing Rabbit retreat house in Big Sur? Why do people disappear there? If Ethan’s own business is about people finding each other via new search modes, could Brooke’s business somehow be doing the opposite? And, as mysterious as all the rest, how could the firm’s competitor, Hounddog, have recruited Ethan’s twin out of his life?

When Ethan decides to undertake his own search for both Jack and Brooke, he stumbles into evidence of a pair of deaths near the retreat house, and suddenly he’s interfering with the police:

“Ethan took a few steps forward and tried to explain, ‘I haven’t been able to get through to them on the phone and I just want to make sure—’

‘This is an investigation, sir. I need you to get back to your vehicle.’

The officer didn’t want to leave his post but was getting irritated. Ethan knew the officer wouldn’t let him through, so he waved, as if thanking the officer for permission, and headed for the crushed metal barrier opening.

The officer shouted, ‘Don’t even think about it!’

By the time the officer waited for a passing car, Ethan had already disappeared into the pitch-black muddy slope. The officer grabbed his walkie-talkie and warned the officers below. ‘Civilian approaching!’

Another voice echoed a complaint, but it was too late. Ethan was upon them.”

Haunting the rest of the action and the secrets that Ethan’s got to uncover is something Brooke told him before she vanished: “Birth order and birthrights shouldn’t matter, but they always do.”

The pace is tight, even though the writing shows an early-career tendency to “tell” more than “show,” making the book a little too wordy. But there’s enough adventure in here to promise a heady career for the author. A parallel could be Paul E. Hardisty’s books, which began a little too “loose” and turned into the powerful Claymore Straker series, increasingly tight and challenging. Espionage from Karen Robards has the same feel.

Granted, Martin Jay Weiss has some distance to go, but he’s already worth reading. And here’s the other excitement of a debut thriller: spotting the ones where the author’s rapid growth will make that first book into a treasure. The Second Son offers exactly that promise.