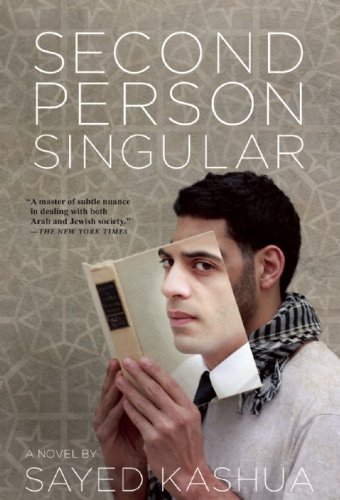 “Second Person Singular is a complicated sonata of voices and identities, translating the identity politics of Palestinians in Israel . . .”

Second Person Singular is the third novel by Sayed Kashua, an Arab living in Jerusalem who writes in Hebrew. The book is a parable about identity: how it is imposed on us, how we flee it, and how we choose it. And it is a parable about the relationship between Arab and Jewish people who live in proximity, or who did in the past, and may do so again in the future under a slightly different guise.

One of the main characters, the lawyer, is neither passionate about his wife nor estranged from her. He often sleeps in his daughter’s room, but he is intimate with his wife a few times a week. He sleeps better that way. Sometimes his wife “visits” him in their daughter’s room.

He is an Arab living in East Jerusalem with an office on King George Street on the side of the Old City that has been in Israel since its founding. Unlike Palestinians in the West Bank (who are not Israeli, or Jordanian, or part of a truly independent state); and unlike Arabs from “The Triangle,” who are Israeli citizens; the lawyer lives in an area that has been unilaterally annexed by Israel. He is originally from a village in The Triangle and has chosen to move to territory of which the future is undecided.

His relationship with Israel is, much like his marriage, something he does not think about very much. He seems to take both for granted, and yet he has managed to navigate both with success. His law office is one of the most successful among Arab lawyers practicing in Israeli courts. He represents criminals in a jurisdiction that many would consider illegal by its nature, but his focus and his success are on quotidian details.

One day he is looking at a copy of Tolstoy’s Kreutzer Sonata and finds a note written in his wife’s handwriting. Like Pozdnyshev in that novella, the lawyer flies into a jealous rage. He does not really trust his wife. He does not know her. But really, does he know himself? And do we readers know him? His story is told in the omniscient third person, but perhaps even the all-knowing narrator cannot know more than the character knows about himself.

His marriage is punctuated by unusual and unjustified outbursts of jealousy, anger, and aggression, much like the relationship between the people for whom this story is a parable.

Because of the note he found in the bookstore, his life crosses paths with Amir, fleeing his origins in a village in The Triangle. Amir tells his story in the first person, and his identity becomes enmeshed with that of an Israeli his own age (Yonatan), who is in a coma. Yonatan most obviously cannot tell his own story, and just as obviously, his identity is imposed upon him by others.

The identity of the lawyer is purposefully confused. He is not even given a name (but in truth, many of us go for long periods of time without our names entering our own thoughts). When a novel is presented in the third person, we know there might be some slippage between what the character is thinking and how the story is told by the narrator. Amir’s identity is presented from within his own subjective consciousness. In his case, at least, we are given an honest portrayal of how confounded he is by his identity.

Just about the only form of narration that we don’t find in this book is the second person, and you the reader, will understand why. The title phrase “second person singular” has almost the same meaning in translation as it does in the original Hebrew. In both languages it is a form of speech, and in both languages it can refer to another unique human. In Hebrew the word for person can also mean body, which may be important for Amir and Yonatan’s plot lines.

Author Sayed Kashua himself has a complicated identity, making him uniquely qualified to write this novel. He is an Arab journalist who writes a column for Haaretz, one of the major Hebrew daily newspapers in Israel. He, better than anyone, understands the complexity of Palestinian identity and subidentities, and he translates those cultural observations for the Hebrew reading audience.

Mr. Kashua uses the Hebrew language for what Arab characters must be thinking in Arabic. The dialogue at times reflects Levantine dialect—but in Hebrew. He even gives dialogue with characters speaking Hebrew with slight Palestinian accents, but in Hebrew.

The American publication of Second Person Singular has the difficult task of translating all of that into English. At first one might assume that some of the translations are for a non-Israeli audience, explaining the significance of certain streets and neighborhoods and customs. But it turns out most of those explanations are pretty exact translations of the original Hebrew. The only difference is that at times translator Mitch Ginsburg’s prose is tighter and less wordy than the original’s. (Mr. Ginsburg is the military correspondent for The Times of Israel).

Hebrew is a fairly simple language without much need for long complicated sentences. The translation is arguably a slight improvement over the original. It is extremely tightly written, making only the smallest changes by sometimes leaving out an unnecessary word or two.

Conveying all of the original meaning, Mr. Ginsburg’s prose is a pleasure to read and yet retains the original voice with all of that voice’s complications. This must have been one of the most difficult translating assignments possible, and it is written with extraordinary skill.

The original novel won the Bernstein Prize in 2010, and English readers are fortunate to have this excellent translation. Second Person Singular is a story that stands on its own without searching for symbolism. But appreciating the symbolism will give it even more richness and depth. It is a complicated sonata of voices and identities, translating the identity politics of Palestinians in Israel, suggesting the irrational fits of rage and jealousy that have characterized a forced marriage between Arabs and Israelis, and giving hope for the future that like Tolstoy’s main character they will one day recognize their foibles and seek forgiveness.