The Second Mountain: The Quest for a Moral Life 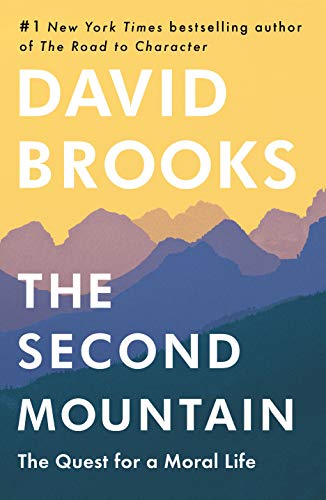 There have been scores of books written about self-discovery. David Brooks goes one step further in The Second Mountain whose goal is to set you free by re-discovering yourself. His path to enlightenment is based in part on how he came to enjoy a happy second marriage and a career that clearly suits him as an intellectual, deep-thinker and surprisingly humorous wordsmith who cares passionately about what happens to his fellow human beings.

He envisions a three-stage mountain-valley-mountain journey. In stage one, driven by meritocracy, people climb the first mountain seeking vocation and love. Their focus is on separating from parents, cultivating talents, building a secure ego, making something of themselves, and carving out a successful identity. Unfortunately, they often find that they are unhappy in a vocation or marriage because “they just sort of slide rather than decide” and “sink into the place” where they happen to be standing.

In stage two, they fall into a metaphoric valley either by accident or disillusionment. Accidents include major changes that come from within or without and knock them off course: job or significant losses, family problems, illness, or financial troubles. Brooks describes disillusionment as a time when someone is “not entirely grabbed by his own life. His heart is over there, but his life is over here.” Being in the valley floods people with despair, anxiety, dissatisfaction, weakness, powerlessness, frustration, vulnerability, or emotional numbness. At their worst, they become almost unrecognizable to themselves and to those who know them.

Stage three is about values clarification and brings their lives back into focus, albeit a new one. If the first mountain is about energy flowing from community to individual, the second is about energy moving from individual to community. People discover (or rediscover) their calling and rush or inch toward it. More interested now in the moral than the material, they join with like-minded individuals to build a better world by following their passion and fostering human-hood. Their goal is to shift themselves and others from a state of division, discord, and isolation to one of attachment, connection, and solidarity.

Regarding love, Brooks offers valuable advice on what makes for a healthy, lasting relationship. He stresses the necessity of strong, honest, empathic, mutually caring connections, and encourages people to stop blaming and, instead, spend time figuring out how to solve problems together. He describes what constitutes and generates healthy versus unhealthy attachment styles, factors that impact our own and others’ ability to be functionally relational, and personality traits that make us better or worse choices as dates or mates.

Brooks endorses a framework of four commitments—vocation, marriage, philosophy and faith, and community—which he illustrates by citing examples from his own life and the lives of friends, acquaintances, historical figures, and celebrities. These vignettes highlight the myriad paths people take to find greater “moral” meaning in life. They also offer insight into how individuals whom we view as altruistic, generous, and community-minded may not always have been so, by describing the transformation they went through to grow, heal, change, and inspire.

Because Brooks is passionate about teaching us how to improve our lives and the world we live in, he parallels the individual journey with our joint task of transforming the planet. He reminds us of the need, especially with today’s political divisiveness, to increase social bonding, collectivism, and collaboration by using the neighborhood as a unit of change. He describes how “networking, deepening roots, sharing strengths and weaknesses,” building together, and creating a shared history does more than give back: It is a way of giving to ourselves.

Brooks takes several missteps in the book. One is failing to acknowledge that not everyone has the good fortune to reach the first mountain top, nevermind struggling out of the valley and scaling the second one. His tone can be judgmental and preachy as he presents the “right” way of living, implying that not following his moralistic prescription means living the “wrong” way.

For secular readers, the commitment to “philosophy and faith” rather than to “philosophy or faith” smacks of condescension and self-righteousness. His insistence that the emotion of awe stems from something spiritual rather than from bio-neurochemistry is nothing more than opinion posing as fact. Considering his focus on community, this kind of narrow-mindedness seems oddly hypocritical and dismissive.

Writing about the dangers of having too many choices and no direction, his claim that “Freedom sucks” is not only untrue and irrational but misses the point that neither structure nor freedom is superior to the other; both are crucial to enjoying a balanced life. Moreover, regarding balance, selflessly surrendering to others’ needs or a higher purpose and forgoing more self-centered goals only leads to burn out, poor self-care, and the likelihood of abandoning moral causes altogether, however much passion one has for them.