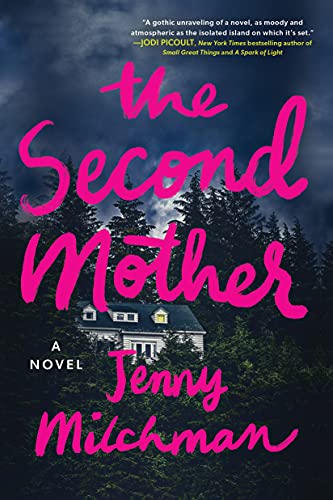 “The Second Mother is a beautifully written page turner.”

Is there anyone who hasn’t at least thought about running away? Just up and leaving to start a new—and better—life in a brand-new place?

Julie Weathers, engulfed in the depths of unrelenting grief over the death of her infant daughter does just that after her fragile mental state prompted a mini-meltdown in the baby aisle of the general store:

"She couldn't explain the sudden flurry of white; it was as if it had begun snowing right here in The Everything Store. Cloth diapers, Julie saw through blurred eyes, made of fair-trade cotton, the packaging somehow torn open, no clawed open, so that the squares fell in a pile on her lap. Julie leaned down, burying her face in the sweet-smelling heap until it grew sodden, plugging her nose and mouth."

She knows then she has to get away.

She applies online for an out of state job, a teaching position in a one room schoolhouse on a secluded island off the shore of Maine. Just what she needs. But her newfound enthusiasm is dulled when David, with whom she'd endured a marriage that for years has staggered along on the rocky road of booze, mercifully put it to death. He wants a divorce.

And just like that, she is on her own along with her beloved dog, Depot.

Except that he takes the dog, too.

As is her habit, she finds solace in her only BFF:

". . . Amber liquid sloshed as she pulled out the stopper and breathed in the aroma. Filling a water goblet, she took a long, searing pull . . ."

This is her other problem. She is so adept at drinking she can drain a glass of Scotch at one go, then forego the glass and drink directly from the bottle. Of course, the pre-interview call from Mercy Island comes the next morning while she's showering away a hangover.

They are impressed with her application and qualifications and want to know. Could she commit to at least one year of placement? Could she start right away? Could she come in for a personal interview? Yes, yes, and yes.

The interviewer warns her right up front of the challenges she'll face living on a secluded island of tourists and lobster fishermen. Long winters, an hour-long ferry ride to the mainland over rough seas, food shortages in stormy weather, no cars allowed, undependable wi-fi. Rather than be discouraged, Julie finds this charming and feels the pieces of her new life falling into place. They give her three weeks to pack and prepare during which she reclaims her dog.

It is on the ferry ride to the island that misgivings crept in. Part of her feels as though she is abandoning her dead child, shunning the familiar places they had enjoyed together. Grief makes new headway. Studying her fellow passengers, obviously residents of the island, maybe even parents of the students she will be teaching, she senses something is off. When the ferry docks, everyone rushes away leaving her stranded:

". . . she searched for the person she had been told to expect. Someone to welcome her to the island and show Julie her new digs.

". . . aside from the shrill of gulls, all was quiet. Back at the dock, the boat rocked up and down, nudging waterlogged padding tacked up to protect the flanks of the ferry. Thorn-sharp barnacles encrusted poles extending into the seabed. A pickling smell, salt and fermentation and rot, emanated from shaggy, kelp-draped rocks. A mouth of beach lay to the left, while the right climbed a steep pitch ending at a structure built of weathered boards. Directly in front of Julie, another trail led upward more gradually, losing itself in a cluster of short, stubby trees."

What follows is another gripping and satisfying story of suspense from Mary Higgins Clark Award-winning author Jenny Milchman, a story populated by a variety of characters that range from dubious to downright devious.

Right from the opening pages readers will sense an ominous tone of danger yet to come. They'll sympathize with Julie as she tries to overcome her grief and make sense of a string of frightening and unexplained events—optical illusions in the woods, eerie voices and laughter when no one is there, strangers who walk in and out of her house. A troubled boy.

It's a story of questionable parentage, fractured relationships, forbidden love, familial discord. Julie soon begins to wonder who she can trust, and if she has signed on to an island or to a prison.

The author's talent for authentic description will carry readers right along with Julie on the choppy ride in the ferry to Mercy Island, they'll smell the salty air, feel the spray and mist of the ocean on their faces, walk beside her and Depot on the path to an unknown destination. They'll learn along with Julie that this lovely, close knit community is not as welcoming and tranquil as first believed.

The Second Mother is a beautifully written page turner.