The Second Life of Nick Mason 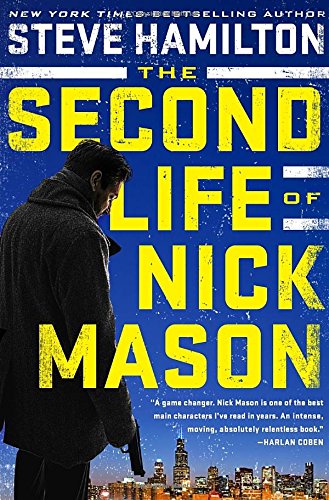 You can't judge a book by the superlatives on the cover. The extraordinary praise is, well—sorry Stephen King, Michael Connelly, Don Winslow, and Lee Child— more fitting to a much better thriller that is not inside the dust jacket of The Second Life of Nick Mason. This is the kind of book you might read on a blustery summer weekend in Nantucket because you've finished your Philip Kerr or Alan Furst and you have to read something with a knotty plot to get you through the damp until cocktail hour and lobster.

Steve Hamilton has created another white male flawed but somehow honorable muscular hero in the vein of Don Winslow's DEA agent in The Cartel or Jack Reacher. But the Nick Mason of the title—a prisoner with 20 more years on his sentence freed by a criminal mastermind to go out into Chicago and do his bidding—is never fully dimensional as he drives his black Camaro through the Chicago streets, a Second City samurai in the employ of a man still on the inside of a cell. He discovers that as restrictive as prison was, at least he was still himself— he doesn't know who he is as he does the kingpin's bidding at the end of a cell phone's tether and the threat of harm to his loved ones.

The novel has some pretty good plotting pitting dirty super cops against dirty arch criminals, and about two-thirds of the way through hits its page-turner pace as it fumbles toward its final and unsatisfying conclusion.

Perhaps it is not fair to criticize a sensitive-yet-testosterone-driven book like this for the weakness of its female characters because it is the flatness of all the characters and their quests that are problematic. And yet a novelist must be able to draw all characters regardless of their gender, and this one is full of shrewish wives shooting daggered looks at their husbands (ex or current) described with little more depth than having dirty blond hair and green eyes; idealized daughters; and a pet-store owning empathetic woman who clearly must be a lot more damaged to see that she's hitching her wagon to a bruiser and doesn't run in the other direction for the sake of simple self-preservation.

Perhaps readers have been spoiled by Scandinavian noir—the novels of Camilla Läckberg, Hakan Nesser and Jo Nesbo (whose Harry Hole is certainly a lone ranger with combative superpowers and a perpetual death wish). Readers want page turners, and plot, and even lucid prose. But readers also want psychological complexity and human interaction that has a sense of lives really lived in the grime and grit of dirty laundry and who's going to take out the trash or even change the oil in the Camaro between rounds of gunfire and the piling up of corpses.