The Second Founding: How the Civil War and Reconstruction Remade the Constitution 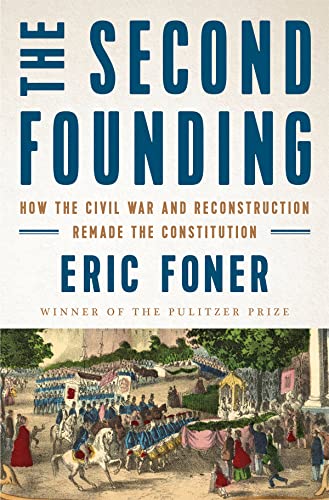 "Just as courts today are still interpreting constitutional provisions that have been in place from the start, the Reconstruction Amendments have faced the same scrutiny for a century and a half, often with undesirable outcomes."

According to some scholars, the United States has two constitutions: A white constitution, ratified in 1789, that paid lip service to the Declaration of Independence’s recitation that “all men are created equal” but established its protections only for white Americans; and a black constitution, created after the end of the Civil War, which added rights and protections for African Americans who had been emancipated.

Eric Foner essentially follows that line of thought in his new book The Second Founding: How the Civil War and Reconstruction Remade the Constitution. By his accounting, the initial founding of the United States was designed to create a new nation freed from the British monarchy, but it wasn’t until the “second founding,” the period following the Civil War known as Reconstruction, that “the United States made its first attempt, flawed but truly remarkable for its time, to build an egalitarian society on the ashes of slavery.”

In The Second Founding, Foner educates readers about the “Reconstruction Amendments”—the Thirteenth, Fourteenth, and Fifteenth, added to the Constitution between 1865 and 1870—including how they came to be, how they have been interpreted by the courts, and how much farther this nation still has to go before its citizens achieve the equality idealized in their words.

For those wanting a condensed version, they break down this way: The Thirteenth abolished slavery; the Fourteenth guaranteed birthright citizenship and equal protection under the law; and the Fifteenth provided voting rights for black Americans—check that, black male Americans. Women of all races would have to wait another 50 years until the country saw fit to grant them that right via the Nineteenth Amendment, ratified in 1920.

Of course, no constitutional provision or amendment is perfect, even though, on paper, the words of the Reconstruction Amendments sounded good. But as with other amendments, their meaning was left all too open for interpretation. Ideals and reality are often inconsistent. Just as courts today are still interpreting constitutional provisions that have been in place from the start, the Reconstruction Amendments have faced the same scrutiny for a century and a half, often with undesirable outcomes.

“Over time,” the author writes, “the [Supreme] Court played a crucial role in the long retreat from the ideals of Reconstruction,” often adopting interpretations that “restrict the scope of the second founding.”

Each of the three Reconstruction Amendments had its champions, but also its detractors. While constitutional abolition of slavery would ensure that no future civil war would be fought over the issue, it granted Congress enforcement authority, which many believed marked an interference by the federal government in what had always been considered a state issue. Even some northerners asked, if the constitution can “abolish one form of property without monetary compensation, why not others?”

For many, the Fourteenth “represented a dramatic repudiation of the powerful tradition of equating citizenship with whiteness.” And the Fifteenth, which guaranteed that the right to vote “shall not be denied or abridged . . . on account of race, color, or previous condition of servitude,” opened its own can of worms, including its “possible future impact on the Chinese population.” The country would try to deal with that issue, at least partially, in 1882 with the Chinese Exclusion Act, but that’s a subject for a different time.

This is a book that history buffs will love, but it also serves as a cautionary tale. Foner notes that “[r]ights can be gained, and rights can be taken away,” and the “project of equal citizenship remains unfinished.” And so, The Second Founding encourages the reader to look backward in order to look forward. “So long as the legacy of slavery and Jim Crow continue to plague our society, we can expect Americans to return to the nation’s second founding and find there new meanings for our fractious and troubled times.”