Seaweed Chronicles: A World at the Water’s Edge 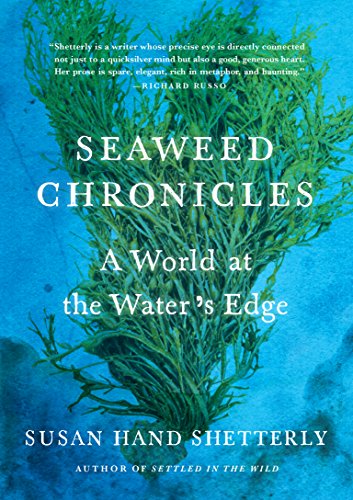 Seaweed Chronicles is the story of a place as told by the once abundant creatures that became resources for human use, and the last harvest left: the habitat, or rather the ocean forests of Alaria and Ascophyllum and other melodically named seaweeds. Downeast Maine, like so many coastal areas worldwide, is on the cusp.

Having depleted (or destroyed) the Gulf of Maine’s cod, alewife, and other fish stocks, its whales and lobsters and so many other species, is seaweed now the next (and possibly last) crop to be industrially gathered for short-term profit? Or are seaweeds, long overlooked and little understood, actually the cornerstone of a biome that shelters diverse creatures, and which could support a small-scale, locally focused human economy?

We meet a scientist turned fisherman whose research into cod stocks, including their reliance on seaweed for habitat, earned him a MacArthur Fellowship.

We meet, too, a counter-culture couple that moved to Maine in the early 1970s and whose macrobiotic diet led them from homesteading to wild seaweed foraging to creating a family-run, sea vegetable company valued at over $3 million.

Interspersed are recipes for laver bread, recollections of cooking Irish moss with milk and vanilla to make blancmange, and the story of a Welsh field botanist who, after being fired from her university position in the 1940s because she chose to marry, nonetheless persisted and conducted research in a laboratory built by her husband that revolutionized understanding of Porphyra’s life history and revitalized Japan’s post-World War II nori farming.

We learn that seaweeds are increasingly used as a food or commercial supplement, and as an absorber of marine pollution (sometimes to dire consequences). Climate change and its far too many unknowns loom large. Through it all runs Shetterly’s deep appreciation for a place and its people.

By mid-point, though, Seaweed Chronicles shifts to the future. With seaweed harvests occurring worldwide, will the future be the industrial aquaculture farms of the Pacific where monoculture crops are grown in turbid water? Or will Maine help pioneer a sustainable, year-round model of integrated aquaculture, where multiple species of seaweed provide shelter and other ecosystem services for eider ducks, alewives, shellfish, and other species, and an income for the humans who harvest in ways that re-seed rather than only remove? Shetterly’s stories become those of ecosystem activists, resource managers, and others who are learning as they go where much is unknown and the stakes high.

This is a big story to tell, so perhaps it’s understandable that Shetterly only tells half of it. We don’t hear the voices of Maine residents who want the jobs that large-scale harvesting promises. Shetterly lets the voices of those calling for sustainable management ring clear on what they’ve learned from research or running a business. We learn, too, of their personal histories with some who are newcomers, and others scions of families who have lived in Maine for generations.

Yet Shetterly says little about what these remarkable people have learned of themselves or of human nature from their passionate engagement with kelp and coast and home. Their unexpected epiphanies, their unwanted but hard-won wisdom is also part of the complex story of how humans turn a geographic place into a home to care for over the generations, and perhaps Shetterly will return to the coast she loves to make that her next story. Shetterly is equally circumspect about her own reasons and reactions, enough so that it wasn’t clear why she spent years alongside her neighbors in the hard labor of trying to restore one particularly problematic alewife run.

Yet despite this, Seaweed Chronicles is a book about hope taking the form of a love of place fortified with scientific knowledge and human stubbornness. Readers new to the complexities of ecosystem management and restoration will find Seaweed Chronicles an excellent introduction to the topic. Likewise, nature and science enthusiasts seeking to understand an often overlooked part of marine life will find much to learn here. So will any reader seeking reassurance that yes, the world is still filled with creative, knowledgeable, and passionate people testing the ideas that may give the places we call home a chance to recover and replenish.