The Season of Second Chances: A Novel 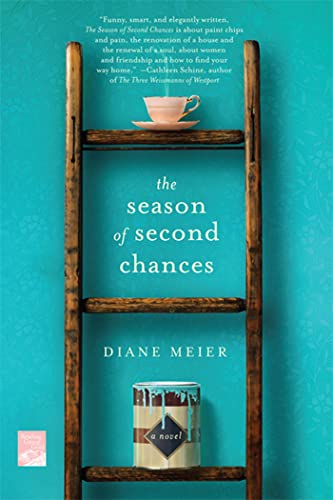 “. . . my house, my home, had become something deep and comforting to me, far beyond what I’d ever expected to find or feel in an unprofessional world, or a world outside of ideas, of letters and literature.”

Have you ever watched one of those home improvement shows on a channel such as HGTV where you patiently wait through the whole show for the big reveal at the end—and then the end is a disappointment? There was simply less here than expected.

This is the story of a romance between an academic homeowner, Joy Harkness, and a handyman-carpenter by the name of Teddy Hennessey. Joy leaves the politics of Columbia University to teach in an innovative new program at Amherst College in Massachusetts. She has plenty of money so she buys her first real home, which is a rundown Victorian. Of course, it needs to be rundown in order for Teddy to enter the picture.

It was the character of Teddy Hennessey that just did not add up and made the read slower than it should have been. When we first encounter Teddy, he’s the handyman who listens to The Who cassettes all day on his boom box. That’s when he’s not reciting the poetry of Yeats, from memory no less. Now, really, what are the chances of hiring a handyman like that? Well, virtually none in the real world.

Oh, but then we think that maybe Teddy’s a closet intellectual who is just dying for the chance to go to college, something that Joy can likely help him with, right? No, it turns out that Teddy is afraid of going to school because then he’d have to leave his sainted mother who has him wrapped around her finger like a nine-year-old. So we’re left with a man-child who is simply not likeable. Why the once-married, yet independent Joy is attracted to the mess that is Teddy is a sheer mystery.
Since the romance between Teddy and Joy appears to be doomed, Joy develops an attraction to her abode. This is merely a comforting, if hardly an earthshaking, premise on which to build a novel.

“I turned and noticed, as I climbed up the steps to the porch, that my house looked warm and welcoming. The rooms were lit, glowing from within; the colors they reflected were soft and inviting. There was life in this house, and I was a part of it.”
There’s also a lot of crying in this book. “Tears ran down my face and puddled around my nose before soaking the pillow. I didn’t know why I was crying. . . .” “I’ve cried more this year than in the past twenty combined.” “(I) cried until I didn’t think there could possibly be any liquid left in my body.” I’m not sure why the otherwise solid—and increasingly feminist—protagonist needs to experience such intense crying jags—another confusing factor.

One more confusing issue concerns a major scene in the book. Joy’s married-but-separated friend Donna is savagely attacked by her former husband. Donna’s ex uses a golf club to beat her nearly to death; pieces of her scalp are found on the club by the police. Donna apparently has several broken bones in her face and is in critical condition. She is rushed to the hospital for life-saving surgery and facial reconstruction. A number of the characters in this story act commendably, taking care of Donna’s children during the time that she’s away. Eventually, Donna returns home on Valentine’s Day and the very thing the reader wants to know goes hauntingly unanswered: What does her face look like? It’s as if the character was made human but returns as a ghost.

On the plus side, there’s some nice humor in The Season: “I went into the dressing room and emerged from the curtain in outfit after outfit, like a puppet in a Punch and Judy show.” But as for the ending of this story, it just seemed to me to run out of steam rather than conclude in a definitive and logical way.
Some will be attracted to this book because of its promise of a type of late-in-life feminism, or the notion that someone can, in a sense, partner with one’s surroundings. Both are promising and positive statements but they did not eliminate a sense of hollowness. Nonetheless, Diane Meier has a nice, entertaining writing style.

“I had no story . . . But my vantage point was, perhaps, too close to the shore to see that I had, at last, begun to swim toward my own life.”

For the right reader, there may be lessons here that will assist in commencing a journey of self-examination and discovery. For that, it is never, ever, too late.