Searching for Stonewall Jackson: A Quest for Legacy in a Divided America 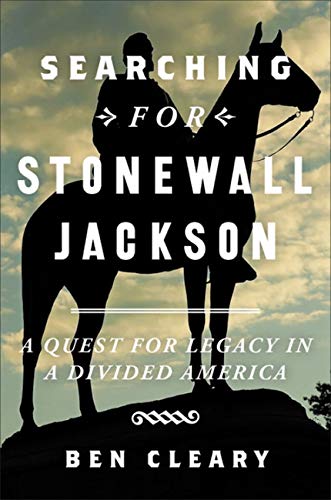 “Stonewall Jackson was a man of contradictions—a God-fearing Presbyterian fighting for an unjust cause and a mediocre college professor who, when tested under fire, became a legendary general. The trick is to reconcile the two and extol his leadership and courage without glorifying his cause. A mighty fine line to walk.”

In today’s culture wars, the subject of the American Civil War can be a touchy subject, especially if you’re writing about Confederate heroes, monuments to whom are under daily attack. But history can’t be ignored, and there are lessons to be learned even from rebel leaders. The difficulty is trying to view the events and personas of the 1860s without being prejudiced by the sensibilities of the 21st century.

That’s exactly what author Ben Cleary has done in his eminently readable volume called Searching for Stonewall Jackson: A Quest for Legacy in a Divided America. Rather than merely producing a dry recounting of Jackson’s life based upon musty documents and scholarly tomes, Cleary takes the additional step of recreating Jackson’s movements, starting with his early days and then visiting battlefields where the general’s legend was established.

As he succinctly explained to the Fredericksburg battlefield’s chief historian, “Basically, I’m trying to go places Jackson lived and fought and see what they’re like today. . . . And parallel that with his story. Hopefully, I can be fresh and insightful with both.” Mission accomplished!

The result is as close as one can get to putting one’s self in the boots of that Southern icon and seeing the war through his eyes rather than in hindsight burdened by today’s sensibilities. Cleary notes the danger of doing just that when he blasts Confederate leader Maxcy Gregg—a “Fire Eater” who “advocated reopening the Atlantic slave trade”—for being a Renaissance man without the expected accompanying “progressive values.” However, Cleary says, “My thoughts shifted, and I imagined someone in the future judging me like I was judging Gregg.”

Although Cleary doesn’t produce much new in the way of facts, he does occasionally offer new interpretations of known facts to laymen not versed in scholarly disputes. For instance, it’s common knowledge that Jackson earned his nickname at the first battle of Bull Run, when General Barnard Bee rallied his men behind Jackson’s Virginians by declaring “There stands Jackson like a stone wall.” Cleary tells us that some historians “contend [Bee] spoke out of annoyance rather than admiration: Jackson was anchored like a wall on the field, not coming to his aid.”

Another Bull Run account has Jackson’s middle finger shattered either by a bullet or shrapnel, but shrugging it off as “only a scratch, a mere scratch.” It doesn’t take much imagination to picture Jackson as Monty Python’s black knight blocking King Arthur’s attempts to cross a bridge by shaking off the loss of his limbs as “but a scratch” or “just a flesh wound.” Rather than a comic figure, though, Jackson survived the battle to become a legend only to later lose his life when mistaken by his own men for the enemy at the battle of Chancellorsville.

By anybody’s standards, whether viewed through the lens of the present or the past, Stonewall Jackson was a man of contradictions—a God-fearing Presbyterian fighting for an unjust cause and a mediocre college professor who, when tested under fire, became a legendary general. The trick is to reconcile the two and extol his leadership and courage without glorifying his cause. A mighty fine line to walk.

As a warrior, Cleary clears the devoutly religious Jackson, who prayed before, during, and after battles. “[V]iolence is an integral part of the human condition and could happen anywhere: Becket murdered in the consecrated cathedral, the Civil War soldier shot in a nondescript patch of woods. It is who we are.”

He is less forgiving, though, of Jackson’s defense of slavery, although he found contradictions even there.  As Jackson told his brother-in-law, “Neither of us has any special concern for slavery . . . but both of us agreed that if the sword was once drawn, the South would have no alternative but to defend her homes and firesides, slavery and all.”

Of the six slaves that Jackson personally owned, two had asked him to buy them and one, a four-year-old with a learning disability, was given to him by an aged widow.  Referencing Uncle Tom’s Cabin, the book that Abraham Lincoln famously said “started this great war,” Cleary concludes that “Jackson’s detractors would have trouble fitting him into the Simon Legree mold.”

In closing, Cleary notes that, after 12 years of teaching mostly African American teenagers in a juvenile prison, he was “painfully confronted” by the “legacy of slavery that Jackson was fighting for. . .” Nevertheless, he concludes that he is not drawn to any of the personalities fighting for the Union, but “it’s always the Confederates with whom I have the chemistry.”