In Search of the Lost Chord: 1967 and the Hippie Idea 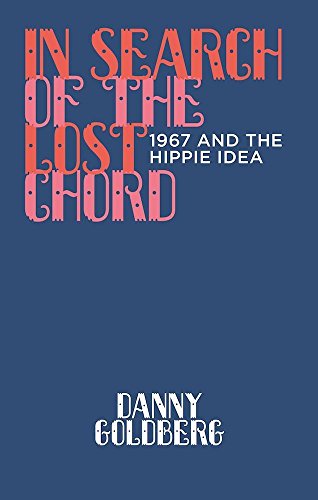 In case the nonstop celebration commemorating the 50th anniversary of The Beatles’ Sgt. Pepper album isn’t enough of a reminder, along comes In Search of the Lost Chord: 1967 and the Hippie Idea by Danny Goldberg to remind us yet again of that now mythical year when seemingly everything was grand and, for a tantalizing brief moment in time, a new way of life seemed within our grasp.

“The hippie movement that swept through the Western world was like a galloping horse in the wild,” Goldberg writes. “A few dozen people were able to ride it for a while, some even steering it for a brief period, but no one . . . ever controlled it.”

As Goldberg sadly points out, “the hippie idea” barely made it through 1967 before it was torn apart by different factions. It had all the staying power of a rainbow after a spring rain shower. But that hasn’t stopped a generation of writers—baby boomers like Goldberg—from trying to explain the year ad nauseam.

Every book of course is colored by the history of the reader but sometimes, as in this case, the subject matter forces the individual reader’s perspective to the forefront. Many millennials, one suspects, must be bored to tears by now of hearing from their elders how great life and music were 50 years ago. And many baby boomers can’t help but nod their heads and agree that, yes, it was all too true and, if you don’t agree, well, go ahead and try to hum a song by Kanye or Jay-Z, we dare ya.

This book is an exhaustive, though too familiar, laundry list of the events that made 1967 so special. There is no way they could not be familiar to a baby boomer no matter how many drugs he or she might have taken. But there are a few surprises along the way. Who knew the poet Alan Ginsberg was so influential as this writer attests?

One wishes that Goldberg, who becomes a Zelig-like character throughout the book, would have made the book even more personal because it is in those moments one begins to understand what he’s talking about. He tells the anecdote, for example, of a high school acquaintance—Paul Mintz—whom he barely knows calling Goldberg over excitedly to listen to a new Dylan song. It was “Ballad of a Thin Man.”

“Mintz and I weren’t friends; his mind was so just so blown by the brilliance of the song that he had to play it to anyone who looked receptive. I was definitely an apt target.”

And then there was the time Goldberg says he was in an airport shoeless and was denied boarding because of it. Goldberg’s eyes searched the concourse until his eyes landed on another guy with long hair. Figuring the guy was a member of the hippie tribe, Goldberg explained the situation and the guy took off his shoes and gave them to him, no questions asked. That my friends explains the hippie idea a lot better than trying to translate what it was like to hear Sgt. Pepper for the first time.

If you are a baby boomer, you will be very familiar with what’s presented here even if it is done fairly well. If you’re younger and you care, one suspects you’ll find this a neat compendium to explain what Grandpa is always talking about.