In Search of the Color Purple: The Story of an American Masterpiece (Books About Books) 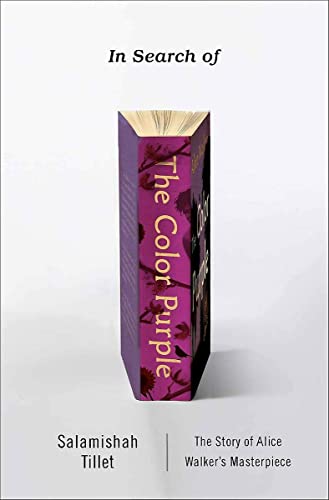 “an enthralling and emotional read . . .”

In her foreword to this portmanteau book, Gloria Steinem, an old friend and admirer of the author of The Color Purple, Alice Walker, outlines the scope of this “life story” of Walker’s book, from the conception of the key characters—based directly on Walker’s own life experience, although Steinem doesn’t specify that here—to their portrayal in the award-winning publication, and subsequent lives in a movie, a musical, another play “and finally a worldwide life right up there with all the classics.”

The many layered In Search of The Color Purple also explores the parallels between Salamishah Tillet’s own life and Walker’s as presented in her novel and elsewhere, which were transformational for Tillet in helping her to deal with her own sexual abuse and sexual fluidity.

The Color Purple portrays not only the gradual empowerment of the abused principal character, Celie, but also her eventual understanding of and generosity toward her abuser. The book has sold more than five million copies and been translated into more than two dozen languages. Adapted by Steven Spielberg as a movie, released in 1985, it generated approximately $142 million at the box office. The musical, and the movie of the musical slated for release in 2022 continue to prove the staying power and relevance of Walker’s story. But the movie The Color Purple, while receiving the most Oscar nominations in its year, did not win any of them. It was opposed inter alia by the NAACP, The National Association for the Advancement of Colored People

Most people who have been enthralled by The Color Purple as an award-winning book (National Book Award (1983), Pulitzer Prize for Walker), and dazzled by its association with Oprah Winfrey, Whoopi Goldberg, Quentin Tarantino, and Steven Spielberg, may well be unaware of the struggles and reverses Walker faced as a poor black woman writer, creating a novel of incest, rape, and same- sex love, in non-standard English!

At one point Walker became “the most hated black woman in America. Ever,” according to feminist professor Beverley Guy-Sheftall, on the grounds of  depicting  black male characters as abusers; and by giving a young, white, Jewish Steven Spielberg permission to translate her work to the big screen.

Some leading black feminists also questioned white Gloria Steinem’s support for Walker and her book. Was Steinem sincere or just “using” Walker to enhance her own image and influence? Walker was also vilified for her indictment of Female Genital Mutilation in Africa in her 1992 novel Possessing the Secret of Joy. It seems that many people were not ready for an influential and outspoken black woman commentator who moved easily among all faiths, races, and genders.

While Tillet quotes extensively from Walker’s enemies and detractors, it would have been good to have stronger analysis and commentary from Tillet herself on the polarized response to Walker’s work both in terms of race and gender.

This is a gripping and many-layered account of Walker’s life and her literary inspirations that continue to inspire subsequent generations and influencers, not least members of the #MeToo movement with its focus on addressing sexual and gender-based violence.

The book is in principle structured around the three main female characters of the novel—Celie, Shug and Sofia—though this is not such a helpful device, and it’s hard to see how the material presented reflects that organization, as it is largely chronological in its examination of different media representations of the key story.

The many interwoven threads, actual and fictional, are often difficult to follow, and that may be Tillet’s intention. However, it would have been helpful rather early on to have a crisper account of Walker’s life. The diagram Alice Walker’s Family Tree and the Character’s Inspired by Them is in great danger of being overlooked and should be integrated into the text rather than slipped in next to the Table of Contents. A summary of the main plotlines of The Color Purple would not go amiss for those who read it several decades ago. And it would also be useful to be reminded of the rest of Walker’s oeuvre by providing a simple annotated bibliography in the Appendix.

Overall, however, this is both an enthralling and emotional read, with Walker herself emerging from among the many voices raised here as still the strongest and most authentic.