In Search of Cleo: How I Found My Pussy and Lost My Mind 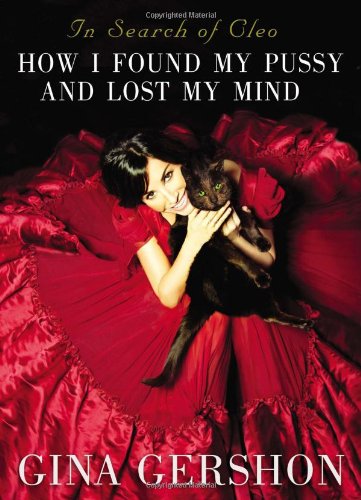 There is an interesting conceit at work in the core of actress Gina Gershon’s new book, In Search of Cleo: How I Found My Pussy and Lost My Mind.

Given that title, the easy way out of course would be to note that Gina Gershon is herself a sly puss or some such comment, but this autobiography leaves me feeling far more poetic.

Instead, let’s choose to willfully ignore the heavy handed implications of that subtitle, however apt it may be, and focus instead on the central idea: the way that a person behaves when faced with the loss of a beloved pet is emblematic enough—of who that person is and what he or she has to offer in any loving relationship—to become the basis for a memoir.

The moment of impact occurs when Ms. Gershon arrives home in Los Angeles, having been off in Manhattan for a few days doing the actressy things that actresses do, only to be told by her poorly named assistant Cassandra that Cleo the cat is missing.

The rest of the short In Search of Cleo deals with the processes and pathways Ms. Gershon followed in her increasingly frantic attempts to get her pussy back.

This literal journey through the early morning streets of L.A. (sometimes on hands and knees after the famed pet psychic Sonia—to whom Gina Gershon is sent by Ellen DeGeneres when the comic finds out that Cleo ia missing—who insists that Gina needs to view the situation from the cat’s POV) rather cunningly (from a literary POV) becomes the metaphor for the author’s life journey. The loss of the cat is symbolic of all the lost and failed relationships (with humans as well as animals) the actress has experienced in her life.

Gina Gershon is an avowed believer in psychics, past lives, soul mates, fate, friendship, and, above all else, cats. There is no overstating the importance of Cleo in her life, most especially at the time in which he disappeared, about which Ms. Gershon writes:

“This cat had been through the wringer with me. In the last few months alone, my uncle Jack had died; my great friend Ted Demme, whom I had moved in with, had died; two other great friends of mine both died of incurable diseases; and I had just broken up with my boyfriend of eight years (who didn’t die). Needless to say, I was in a pretty dark place.

“So when I came through the door looking for my baby, my love, my support system and asked Cassandra . . . ‘Where’s Cleo?’ and she hemmed and hawed and guiltily responded, ‘Welllll . . .’ I immediately felt my body begin to change. It was as though hair sprouted from the pores on my face, and my fingernails morphed into claws, Wolfman style. A tsunami of rage was building within me, threatening to rip her hippy-dippy body to shreds.”

The happy surprise is just how well the concept works.

As the happy ending is foretold in the book’s subtitle, I’m giving nothing away by revealing that by the time Gina Gershon is reunited with “Master Cleohold” (the cat’s full name—she mistakenly believed he was a she when she adopted him), she has shared with her readers more of her life’s story than is typical in a Hollywood memoir.

“The first time I fell in love, I was seven years old. I was leaving the school Halloween carnival when a pale, skinny man with dark eyeliner and a cloak came up to me outside as we were waiting to cross the street. My mom was with me and talking to a friend of hers. It was unclear whether he was in costume or just an oddball Goth guy. Ever since Dark Shadows, the original vampire series, I had become obsessed and enthralled with the undead, and I was excited by the fact that he was a possible vampire. He was staring at me intensely, the way Barnabas Collins would stare at Angelique, as he held out this tiny little black and white kitten in his long, skinny white hands. My breathing became shallow and I seemed to be in a trance. Goth Man looked me deep in the eyes and in a very confident manner said, ‘This cat belong to you. It is yours.’ I had no choice but to silently accept his gift with a quiet not of understanding. He slowly turned and floated away. My mother, who had missed the entire exchange, finally turned to me and, seeing the kitten in my arms, immediately began to protest. I quickly reminded her that in my hysteria of Harry the Third’s death (I’ll get back to him later), she had promised me a new pet, and the goldfish that were swimming aimlessly around in the plastic baggie in my hand were mere decoration and did not count. There was no negotiating. My future best friend and I went home to the safety of my pink-and-red floral room.”

First, that Ms. Gershon, whether in a panic to find her pussy or not, tends to be something of a gypsy and is an inveterate risk-taker, as noted by her childhood interest in the Goth Man here, and by the number of times in her memoir in which she wanders into the homes of strangers or hands them her phone number, all on the promise of help in finding her cat.

Second, that Ms. Gershon is a charming raconteuse; however involved in the occult she may be, she apparently wrote the book without the help of a ghost. Turns out she is a writer with a compellingly strong voice and a mean turn of phrase.

Third, that what she has written here, while certainly a pleasant enough memoir that can be savored at a reader’s leisure, is in reality a hell of a one-woman show. Lift the text whole, stage it, fill the black box with images of Goth Men, psychics, celebrities, pimp, hos, and cats and let Gina Gershon share her story with a live audience just as she wrote it here. Let her be just as funny, bitchy, touching, and honest as she has already been here.

The live version of In Search of Cleo: How I Found My Pussy and Lost My Mind would run for years.