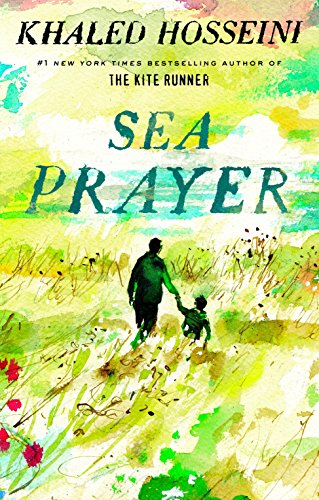 International bestselling author Khaled Hosseini’s new work Sea Prayer, a glimpse of a final, treasured moment between father and son, does not disappoint. At first glance, at 48 pages, it seems to be a children's picture book, unlike Hosseini's The Kite Runner and subsequent novels, but it is so much more.

As he waits for dawn and a treacherous journey from an unsafe shore to an unknown, likely unwelcoming one, a Syrian father composes a letter to his tiny, sleeping child. His letter begins with blissful memory, then laments that his son has known war more than peace, and ends in hopeful prayer.

In prose as simple and lyrical as a field of gold grain shining on a late Spring day, he recounts the story of a happier time in Syria, a family trip to their ancestral home in the countryside, vivid memories that meld with the Syrian landscape.

Until the war begins. Instead of bearing a sunrise, “the skies spit bombs. Starvation. Burials.” Instead of yielding wildflowers, the horizon turns from green and gold to black. Only wispy remembrance remains, hanging in the air “like some long-dissolved rumor.”

Who knows what awaits the refugee family as dawn breaks? And the dawn after that?

No less compelling are Dan Williams’ illustrations full of mountain, sand, and azure sky, broken by an occasional red anemone, the colors of Syria before a weary, unrelenting war takes over the pages, turning them the ashen hues of conflict.

The story becomes all the more heart-wrenching on the last page. Hosseini, an immigrant himself, inspired by the tragic death of two-year-old Alan Kurdi, wrote this as a tribute. Forced by war, the entire Kurdi family tried to cross to a new “home” in a rubber raft, which capsized before it reached land. Alan Kurdi’s father was the only one in his family to make it to the other shore alive. It’s but one story that caught the world’s attention.

Thousands of similar stories exist. In the year following Alan’s death, 4,176 people perished or went missing attempting the same perilous journey. Each of the more than 8,000 lives lost (and counting) in the Mediterranean had a story.

Sea Prayer is a book that crosses genres and boundaries. It reads like a poem, possessing the rhythm of an old, almost-forgotten song. It’s a book that students as young as seven (as soon as they're old enough to know what war is and does) will appreciate. It's also one that teachers can use in their classrooms and families can read together. It will allow adults to walk, for a few moments, in a refugee family’s shoes. It helps us imagine the desperation of a decision to flee home and cross a cold, dark sea.

All proceeds from the sale of Sea Prayer go to support the work of UNHCR (the UN's Refugee Agency) and to The Khaled Hosseini Foundation to help refugees worldwide.