Sea People: The Puzzle of Polynesia 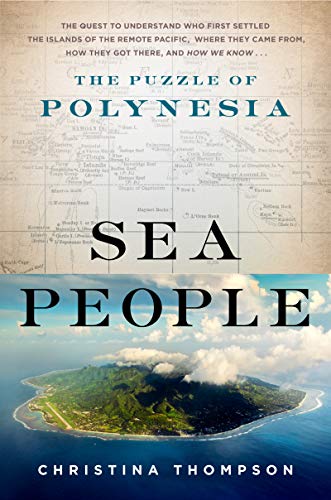 "In Sea People, Pacific historian Christina Thompson tells of the European discovery of the Polynesians and the island people's opening to the world."

Polynesia is a triangle "of ten million square miles in the middle of the Pacific Ocean defined by the three points of Hawai'i, New Zealand, and Easter Island." People settled these islands more than 1,000 years ago originally "with a single language and a set of customs." They established, "until the modern era, the largest single cultural area in the world."

The Pacific Ocean is so vast that "from space, you might notice that you would not be able to see both sides of it at the same time." It is Earth's "largest single feature." Because "Oceania" has such epic emptiness, for tens of thousands of years "after humans colonized its edges," "the islands of the Polynesia Triangle . . . remained beyond the reach of man."

Eventually, Polynesians settled the high islands of volcanic mountains and the low coralline islands with atolls, reefs, and shallows that the European vessels found so dangerous. They succeeded in colonizing the largest ocean on the planet, "occupying every habitable rock between rock between New Guinea and the Galapágos."

These sea people do not seem to have had "a name for the ocean as a whole" although they had a name for every part of their sophisticated canoes. Polynesians come "the closest thing to a sea people the world has known" for "they were the first to leave the chain of intervisible islands and out into the open ocean."

The Polynesians became a culture that measured not in distance "but time as experienced by a subject under certain conditions." Tahitian navigational techniques involved invocations to the god Tane for a favorable wind."

This culture "existed in splendid isolation," however, and thus "a natural laboratory . . . for the study of language change and genetic diversity and social evolution." They lived in something "like a web of connections in which gods, ancestors, humans, fish, birds, insects, rocks, clouds, winds, and stars linked to one another genealogically."

In Sea People, Pacific historian Christina Thompson tells of the European discovery of the Polynesians and the island people's opening to the world. "The evidence is complex—not to mention partial, fragmentary, and perennially open to interpretation," as with the puzzle that "not all of these animals [dogs, pigs, and rats] made it to all of the islands."

The author relies heavily on the writings of Captain James Cook as would any study of that time and place. Problems emerge, however, because "English is a terrible language to try to reproduce sounds."

Oral history also proved a problem because European and Polynesian "cultures were very dissimilar ways of thinking." Finding the history of these people involved such research as exploring the 1,000 languages of the Austronesian family.

By the time Europeans found it, Tahiti's archipelago had 300,000 people. British Captain James Cook obtained information on dozens of islands from native navigator artist Tupaia "from the Marquesas to Samoa, a distance of more than two thousand miles."

Easter Island (in Polynesian "Rapa Nui"), "the most isolated inhabited island in the world," has mysterious enormous statues ("moai") that represent this special people and the endless questions of what they did to their environment. To the first European arrivals, the greatest mystery came from how the Easter Islanders came to settle there.

New Zealand (in Polynesian "Aotearoa"), however, has "plains, lakes, rivers, fjords, mountain ranges, and a land area more than eight times that of all the other islands of Polynesia combined." Once part of the lost continent of Gondwana, its size and isolation created animals and plants that evolved into a remarkable diversity and living relics. Polynesians ate several local species into extinction.

European imagination filled the "vast, unbroken stretches of water" with huge landmasses that did not exist and other false ideas. They "took nearly three hundred years to complete" their exploration of it.

Sometimes the second visit came hundreds of years after the first as discovery originally came as a byproduct of establishing trade routes or "roads" across the Pacific. The great serge in exploration came from Great Britain following its victory in the Seven Years War of the 1760s and its subsequent expansion.

The exploration/exploitation of Oceania largely came from the East, not the West (the "Far East"). Europeans, like the Polynesians, became prisoners of "the distinctive pattern of winds and currents." They also had the problem of safe entry of the Pacific "before the man-made shortcuts of Panama and Suez."

The days of exploration in the Pacific islands neared their end with the death of Captain James Cook in 1779. An era of disease and exploitation came almost immediately afterward when "the first whaling ships arrived."

The Polynesians now had access to all that the world had to offer.  "Polynesians became literate and, in some cases, well traveled and were exposed in large numbers to Old World pathogens for the first time."

"Back in Europe, the idea of Polynesia began surfacing in popular culture." Some chapters of Sea People discuss Polynesians in European historiography and literature but also how, in their oral history, the sea people had "contempt for the very idea of fiction, they could not see the point of allegory as a form."

Polynesian oral history too often went "largely dismissed by scholars" in the West as fiction at best. "They were often as literature or religion or political tracts, as metaphors or symbols or allegories, but never simply as documentary accounts."

Europeans, however, often arrogantly perpetuated inventions and misguided theories about the Pacific peoples. The last chapters of the book discuss in detail modern research into the Polynesians "with the rise of anthropology as a discipline."

The book's narrative is exceptionally well organized and entertaining as well as readable. Sea People has color illustrations and thorough annotation.