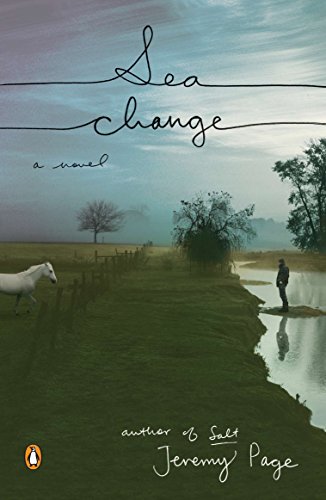 Some pieces of literature are art in its highest form. Sea Change by Jeremy Page is one of those books.He paints with words instead of merely constructing a narrative. His writing style is lyrical. He transports the reader into a world fully realized and created on the page.

Events begin in a surreal fashion. Guy and Judy are enjoying a carefree day in a secluded field with their preschool-age daughter, Freya. Page opens with the beautiful image of the young girl capturing a small bead of rainwater from a leaf. The peaceful moment is broken, when out of nowhere, a wild stallion appears. He charges the unsuspecting couple, killing Freya.

The setting shifts to five years after the accident. Divorced from Judy, Guy is living alone on a houseboat incessantly writing in a diary about what the couple’s life would have been like if Freya had lived. He vividly imagines an alternative existence for the three of them. With maps filling the cabin, he envisions a family road trip across the southern United States. While fashioning this parallel world, ugly truths begin to emerge from his inner consciousness as he struggles to maintain a sense of what is real and what is not.

Stopping at a coastal pub where he once shared a poignant moment with Judy, Guy encounters Marta and her daughter, Rhona. Marta is a recent widow trying to come to terms with her husband’s passing. Rhona, a wild child now in her twenties, expresses her grief through sexual provocation and suicide attempts. Despite the drama they bring to his solitary existence, Guy begins to feel an intimate connection to them. His feelings for Rhona are complicated. At times, he feels nothing but lust, or he looks at her like the daughter he once had who never had the chance to grow up. On the other hand, he looks at Marta as a kindred spirit who possesses the innate ability to truly understand him.

Throughout the book, nature is framed as a powerful adversary. In a foolhardy frame of mind, Guy heads straight into the storm clouds of the treacherous North Sea. As he struggles to stay alive, he has a ghostly visitation from Freya. Throughout he is desperate to get back to her, but he comes to realize she has been there the entire time. She has never left him—and never will.

The ending of Sea Change is quite extraordinary. Page knows what the reader wants; however, he doesn’t take the easy way out with a predictable pattern. Instead, he hands the reins over to Guy. It is truly an inspired twist. One that garners a more appreciative response from the reader rather than if Page tied all of the loose ends in a neat bow. It is an open-ended conclusion, but that’s what makes it all the more fulfilling.

Overall, the brutal power of nature pales in comparison to the tumult of one’s inner life.