The Sea Is Ours: Tales from Steampunk Southeast Asia 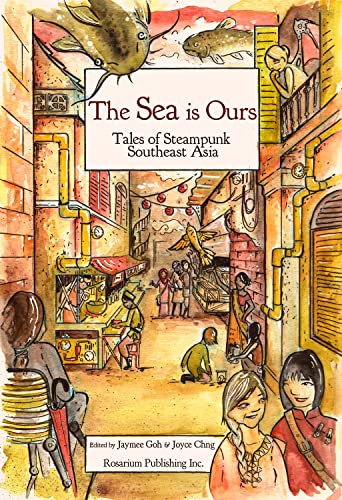 The Sea Is Ours is a subversive and rebellious addition to the steampunk canon and one that's been needed as it highlights points of view outside the norm. These stories, a number of them Filipino, but also Thai, Vietnamese, and Malaysian among others, manage to encapsulate 12 different ways of looking at steampunk as a genre. Glorifying European cultures during their time of expansion means stories are often told from the conqueror’s point of view. These stories, in contrast, explore what's happening to the people whose culture is being expanded, from their point of view.

The quality of these stories is generally good, though the patterns they employ differ from standard European steampunk; all that means is readers unfamiliar with non-European stories will find their experience expanded. The genre overall is expanded in these stories to be more inclusive of different peoples and diverse in its portrayal of their cultures and lives.

“On the Consequence of Sound” draws a picture of a Philippines that's been stamped with Spanish culture but hasn't entirely lost its own. The plot is more concerned with native concerns like enormous flying fish and floating mountains.

Steampunk as we know it with its gears and cogs and flying ships gets filtered through all these different cultural landscapes, and the genre comes out differently in each portrayal. In “The Insects and Women Sing Together,” the clockwork contraptions are things the locals can't afford, so they are developing their own, more artful alternatives.

“The Last Aswang” is steampunk made mostly of wood and powered by small spirits who live in larger spirits and gods, while allowing the natives to fight off the invaders. It then offers hope and help to other invaded societies across the sea.

Three of the stories, “The Unmaking of the Quadro Amoroso,” “Working Woman,” and “The Chamber of Souls,” concern the humanity of people altered by clockwork—a dancer who becomes a weapon, an automaton made of the pieces left after an accident, and an alien who collects souls and is made of clockwork fused with vines and moss.

“The Chamber of Souls” is probably the most unusual, taking the steampunk trappings to move the story out of a Vietnam in upheaval and into another realm. “The Unmaking of the Quadro Amoroso” is the most beautifully and poetically written, and also one of the most culturally different as a story of revenge after the world destroys a perfect four-sided love affair. And “Petrified” is the most fun, a story of sky pirates and scientific golems told through the investigations that come after the inciting event.

These are stories in which often marginalized voices get to say their piece, so there are almost no white people. But there is a lot about the changes and damage caused by white people. There's not many men—but the few there are are rebels, hermits, or a part of unconventional love affairs. And there are a lot of women. Women who claim their own fates, and women scattering from the upheaval in their own homelands. Women who love women, women who love science, women who love their families and will fight for them. Restless women who have stories to tell.

It’s eye opening and refreshing to hear these voices without a lot of the filters that historically women have had to speak through. These stories don't translate every word into English. They don't over-explain cultural details. They don't worry about what men will think of them—except in one story where men are the problem. They're all walking a line between their own lives, the lives of their countries, the threat of colonization, and the effects of it—and they all find a different place on that line to settle.

As a whole, what this book does is take the core feeling of steampunk—the idea that history could have gone differently if technology was just a little altered—and applies it to the people who were conquered in real history, letting them throw off oppression, avoid it entirely, or flip it around and claim the power in the politics of colonization. The Sea Is Ours opens the boundaries of what steampunk is, and it's a frequently beautiful and often sharp read.