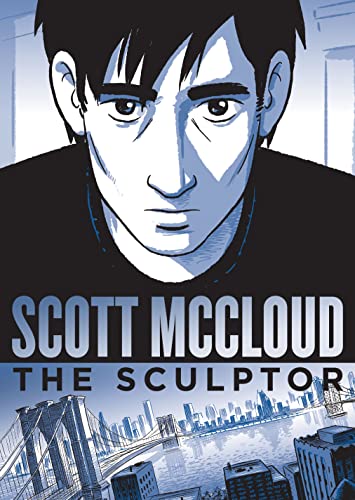 “A master of visual and narrative pacing . . . the book does what great books should do: it stays with the reader long after the last pages are turned.”

The Sculptor was originally published in 2015 to rave reviews and became a New York Times bestseller. This is an updated hardcover edition and is sure to be just as popular. In the age-old story of Faust, a man sells his soul to the devil in exchange for unlimited knowledge and worldly pleasures. The artist in this story doesn’t sell his soul, but he makes a similar trade. Death offers him the ability to make sculptures easily, magically, with his bare hands, but in return, he will live for only 200 days.

David Smith, the sculptor of the title, has wanted to make art for as long as he can remember. He’s now a young man and an artistic flop. He had his big chance with a collector and blew it. He’s down to his last dollar, and all he can think about is the work he hasn’t done yet.

“Every night, I see them . . . these big, monstrous, beautiful things I could make . . . so real I could almost reach out and touch them. My dreams keep growing, Harry. Even while my options keep shrinking. It’s like they’re demanding that I make them, demanding to exist . . . and now I’m scared I’ll never finish a single one.”

Death takes the form of a long-dead relative of David’s, the Harry in the dialog quoted above. Harry suggests that David do what artists typically do: find a loving partner, move out of the big city, take a job teaching art somewhere, and settle down with a family. He can simply make art on the side, “in the basement.” David rejects that scenario. He’d rather a short, but intensely meaningful life. And so the deal is done.

McCloud is a master of visual and narrative pacing. The wordless sequence where David discovers his new powers is powerful. The way the busy streets of New York are woven into David’s artistic vision is equally brilliant.

This isn’t a neat, tidy story. David gets his wish, but naturally it doesn’t work out as he expected. He does create art, but appreciation and fame don’t immediately follow. Time is one of the themes of the book. Of course, there’s the countdown to David’s limited days, but there’s also the suggestion of waiting, working hard, seeing things achieved after long, determined work. That’s the alternative David rejects when he makes the trade with Death.

When David falls in love, the meaning of time changes again. His countdown now affects someone else. Do you spend limited time with the person who matters most to you or doing the thing that matters most to you? How do art and creativity conflict with daily life? How do they feed it? Does David have to make another kind of tradeoff?

The story raises a lot of questions that don’t get answered, leaving it up to the reader to puzzle out their own values. What matters most to David as a sculptor? Is it to be good at his craft or to attain success? What is success anyway? Is it critical approval, money, or fame?

What makes good art? Is it personal experiences or seeing deeply? Is it art that’s universal, that touches the viewer or art that makes an obvious statement? Should art make us think or make us feel?

David’s first magical sculptures are embodiments of personal memories. They aren’t particularly important or emotionally powerful. Some seem almost random, like a dog in front of a Walmart. The ease of creation doesn’t mean that David has a strong vision, something important to express. It’s only after he has meaningful personal experiences with the woman he’s in love with that his art truly takes shape.

There are no easy answers to the thoughtful issues raised here. Instead the book does what great books should do: it stays with the reader long after the last pages are turned.