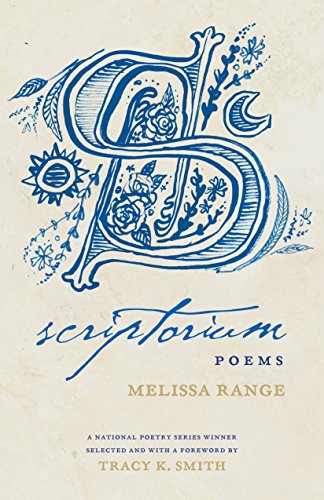 “If you buy only one book of poetry this year, let this be the one.“

If it were possible for Emily Dickinson to sing in a bluegrass band it might sound something like the poems in Scriptorium, a 2015 National Poetry Series winner. There is a living density to this work, sacred and profane, archaic and now, rendered in lines that are rich with syllabic music and muscle. Christian theology, medieval book arts, Appalachia and family ties—all sound their chords as Range explores how we say things and why it matters. There are a series of sonnets, several villanelles, and other forms, all woken up to sound like nothing we’ve ever heard before.

Little is left to chance in this work, the writer knows what she wants (or what she needs) and will lead us there; her intentions are unflinchingly clear. And she is after something deep and valuable, something she pursues with all the determination her ancestors used to extract the coal in the Appalachian mining town she grew up in.

While invoking the language of Appalachia, as in the poem “Fortunes of Men,” Range juxtaposes Biblical language, with “hillbilly” dialect in a brilliant poem that finds the link between. Here are the first two verses

When a youngun’s born,

Only God, the Anointer, knows

What the winters have in store:

On a junebug; the lord tracks her

The theological construct of God the Anointer, as all knowing master of a fate we can’t escape, is set up next to a “trained coonhound” a counter image but so precisely like the first that we see just how much God is a coonhound. Infusing the common place with sacred phrases and images is a technique Range uses to good effect in several poems including:

Thesis: That the body cannot repent

Of its own nativity, cannot re-form

Or tides. That the body can only pull.

The use of  “thesis” here as an introduction also seems to call back to Martin Luther’s, 95 Theses, and we can almost imagine some of these poems as part of the liturgy for a new splinter faith, posted on a clapboard church in a narrow mountain valley. Another poem “Vernacular Theology: Machtild of Magdeburg” tells us who would worship there.

Range is fundamentally interested in how language travels. A series of poems named for the pigments used in illuminated manuscripts, “Verdigris,” “Kernes Red,” “Orpiment,” “Ultramarine,” “Gold Leaf,” and others are at the heart of Scriptorium as they explore the intentions and acts of recording. What was written, by which means, and for whom?

These poems literally color the collection with their vivid lines, rhymed into sonnets that are beautiful to behold and hear such as these lines from “Lamp Black”:

or history or a whimsied hex that burns

all life to tar? We are dust, carbon

spilled out from your Word, a lamp overturned

There is everything good that poetry does in lines like this, music, alchemy, inversions. How she brings back the archaic word glim, meaning candle or lantern, (akin to glimmer) and turns it into a proper name for a deity, the World’s Glim. Then she changes her mind, maybe he’s not all light but a Grim Cinderer instead. Cinder bounces off sin, and we think of sinners, and where they go to burn. Burned, we are dust, carbon, ash, the dark materials ink is made of. And so grateful for ink, that Melissa Range can use it to enchant us.

This collection always feels illuminated and permanent, as if the poems were actually found inside the scriptorium. The book was selected and includes a foreword by Tracy K. Smith as well as notes that guide readers through some terms of medieval Christianity. If you buy only one book of poetry this year, let this be the one.