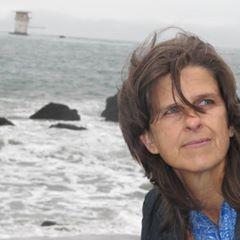 Barbara Roether is a writer and teacher in San Francisco. She grew up in Ohio and left rather quickly and rather young. Her debut novel published last year by McPherson & Co. This Earth You’ll Come Back To, explains why.

She has lived and worked in Morocco and Indonesia. Before teaching she worked in book publishing as an editor and freelance writer; and has contributed to many books on travel and religion.

As an editor at HarperCollins, she created Signs of the Sacred, a series of visual books on religious ritual, and was a West Coast reporter for Publishers Weekly.  She is the author of a poetry collection The Middle Atlas; her essays, and short fiction have appeared in various magazines.

Ms. Roether has a son in college, and is married to the journalist Mark MacNamara. She holds an MFA from Bard College.

This Earth You'll Come Back To

Reading the boldly inventive and fast paced novel Aphasia, is like road tripping through a warm country with your smartest friend; it might be one of the best trips you are likely to take

The BreakBeat Poets Vol. 3: Halal If You Hear Me

Anthologies of poetry tend to resist reviews, but when a collection like the humorously named Halal If You Hear Me, (halal, at play with holler, is the Arabic word for pure or kosher) sets

We, the Almighty Fires

In We, the Almighty Fires, Anna Rose Welch proves yet again that sex and religion are always the best topics for poetry.

“Compass educates us, even as we marvel at its obscurity.”

Reading Paul Auster’s novel 4 3 2 1 is a bit like wandering around in an old medina with Woody Allen and Leo Tolstoy.

“If you buy only one book of poetry this year, let this be the one.“

"If reading about smoking hashish were half as interesting as doing it, this novel would be brilliant."