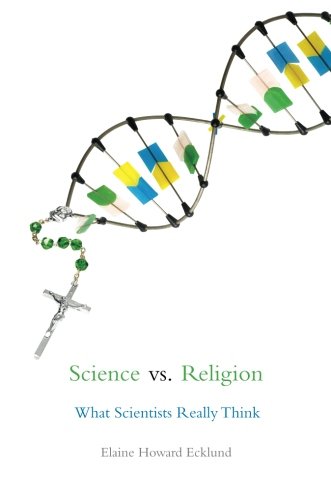 Ecklund sent surveys, each containing $15, to professors and researchers of the natural and social sciences at various elite higher-education institutions across the United States. Those who ultimately answered the surveys, either by mail or over the phone, responded to questions about various topics, including the following: —To what extent do you consider yourself a spiritual person?—In what religion were you raised?—How important was religion in your family while you were growing up?—Compared with most Americans, where would you place your RELIGIOUS views on a seven-point scale, with 1 being “Extremely Liberal” and seven being “Extremely Conservative?” Ecklund analyzed the religious, political, demographic, and career-related factors for the scientists who responded, and compiled the data into Science vs. Religion. Throughout the book she tries to make sense of why scientists in large part are less religious than the overall U.S. population. The differences in these two study populations are striking. When interviewed on their opinions of religious truths, 26% of scientists (versus 4% of the U.S. population) responded, “There is very little truth in any religion;” 71% (scientists) and 84% (U.S. population) responded, “There are basic truths in many religions;” and 3% (scientists) and 12% (U.S. population) responded, “There is the most truth in only one religion.” Furthermore, 53% of scientists, versus 16% of the U.S. population, described themselves as having no religious affiliation. Ecklund continues throughout the book to explore the greater intricacies of religious versus non-religious scientists: their reasons for being non-religious (did they turn from a religion they were raised in, were they raised non-religious, or had they been raised with religion but never become religious?), how they deal with religious issues in the academic and classroom environments, and whether they were open to religious discussions in these settings. She emphasizes that religious scientists are more likely to be more private about discussing their religious views in their university settings. Ecklund attempts to reconcile the disparate religious natures of the interviewed scientists and the U.S. population. However, she continually tries to foster the idea of bringing religion into the scientific realm, to perhaps the dismay of many scientists who view religion as being non-reason-based, and consider science to be a rational field. To a large degree, Ecklund will satisfy the reader’s curiosity concerning the discrepancy of religion between scientists and the U.S. population in general. She draws an important distinction between religion and spirituality: a spiritual person is not necessarily religious, but has a sense of a greater responsibility, whether to family, society, or mankind in general, with less emphasis on the self. Ecklund’s interviewed subjects give varying definitions of spirituality, which is not surprising, given the highly subjective nature of spirituality, religion, and an individual’s moral code. While appearing to alienate scientists in favor of connecting with a larger group of readers, Ecklund maintains a snide view of scientists who as a whole are unreligious for a wide variety of reasons. Ecklund does not account for the fact that academics, whether religious or non-religious, are in search of higher knowledge and the pursuit of answers; whatever motivation or framework influences researchers highly varies, and such frameworks are an integral part of every individual. Religion—like politics—is not an idea that can or should be forced. Religious discussion, whether philosophical, moral/ethical, or historical in nature, has an entirely separate academic field with its own experts. With such volatile science-vs.-religion topics as evolution and creationism, it is tempting to enter heated debates concerning these and other ideas. Ultimately, however, readers will agree that religion (or non-religion) is a highly personal topic. Science is based on the rational construction of replicable, valid experiments designed to test a reasonable hypothesis. Faith takes over at the point at which reason ends.  Whether you are religious or non-religious, it is likely that after reading Science vs. Religion, you will become more so. Reviewer Nicole Parker, Ph.D., is a freelance medical editor and loves reading, writing, and thinking about science.