A School for Unusual Girls: A Stranje House Novel 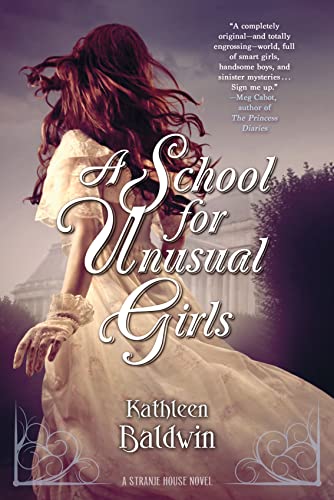 “a rollicking young adult novel loaded with action! adventure! romance! danger! while turning both genre and social conventions upside down.”

The keyword for this novel is “unusual.”

During this period in England (1814), marriageability was a woman’s most important asset. Girls who created domestic havoc from doing science experiments—rash, brainy girls interested in science, period—were definitely not desirable. Indeed, their qualities were often considered mental flaws and subject to corrective therapy or harsh punishment.

Such is the case for Georgina Fitzwilliam. Daughter of high-society parents who are terrified of rocking the boat, she becomes such an embarrassment to them that they haul her off to Stranje House, a reformatory for problematic rich girls.

Unknown to them, or anyone in England, Stranje House’s idea of reformation is harnessing these girls’ minds and talents to serve their country in the guise of proper ladies. England is at war on multiple fronts, including within. Enemy factions seeking to restore Napoleon to power have great interest in Georgina’s invisible ink—what she was working on when she accidentally burned down her family’s stables. It has the potential to change wartime outcomes, so the bad guys must get their hands on it before the good guys can put it into service.

Trouble is, Georgina hasn’t yet figured out the missing ingredient. With important people breathing down her neck, she works with handsome young Sebastian in a race against the clock to solve the chemical mystery. Sebastian is one of the noblemen serving as spies and couriers in an underground network against Napolean’s supporters. But before he can help Georgina finish the ink recipe, he not only captures her heart but gets physically captured by enemies led by a former Stranje House student. That sets Georgina and her crew on the chase.

This combination gives us a rollicking young adult novel loaded with action! adventure! romance! danger! while turning both genre and social conventions upside down. Georgina and her fellow students are that generation’s “mighty girls,” and throughout the story they play roles normally given to men: they invent; they break into dangerous places and escape; they fight; they rescue—indeed, they save the day. They also love with a tigress’s heart.

The book is sophisticated enough to appeal to adult readers, too, with its slightly alternative history that has the sass of a modern chick-lit novel. And there’s more to come: A School for  Unusual Girls is the launch volume of the Stranje House series in process by an award-winning author who specializes in writing about mighty girls.

So if you (or your teenagers) like fresh takes old memes and themes, try this fun and unusual novel.