The Scent of Pomegranates and Rose Water: Reviving the Beautiful Food Traditions of Syria 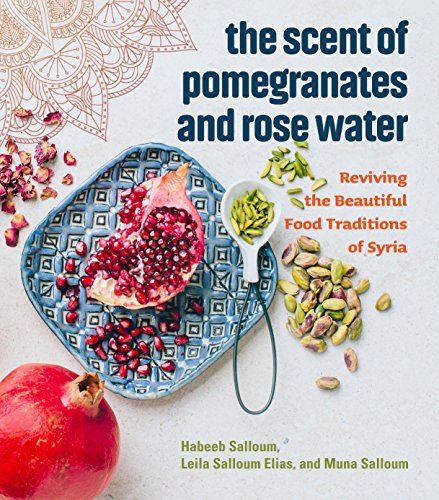 “the best Middle Eastern cookbook in the last 20 years if not the best ever. It’s richness of storytelling both historic and personal and its treasury of recipes is exactly what a great cookbook is all about.”

The evocative title of Arab-Canadian father Habeeb Salloum and his daughters for their cookbook of the food of bilaad al-shams, the cuisine of Greater Syria, encompassing Syria, Lebanon, Palestine, and Jordan is both enticing and accurate. Their book delivers on its promise and is probably the best Middle Eastern cookbook in the last 20 years if not the best ever. It’s richness of storytelling both historic and personal and its treasury of recipes is exactly what a great cookbook is all about. The Salloums have succeeded.

Their book begins with the modest sounding chapter title “A Brief History of Syrian Cuisine” which in fact is one the most comprehensive introductions to the history of the importance of medieval Arab cuisine not only in the Arab world but in terms of that influence in the medieval West as well.

This is no mean achievement and that chapter alone is worth the price of the book if you are fascinated about why people eat the food they do; the back story if you will. The Arabic cookbooks of the eighth to thirteenth century Umayyad and Abbasid dynasties in, respectively, Syria and Iraq, along with those from Islamic Spain some centuries after those dynasties can provide insight into Syrian food today, and one could even argue Mediterranean food in general.

Syria was part of the Turkish Ottoman Empire for centuries, and the Turks influenced Syrian cuisine as well. The Salloums’ overview of the Ottomans is superlative and more thorough than some specifically Turkish cookbooks. Syria was a diverse land of Muslims, Christians, and Jews and ethnic groups such as Bedouins, Arabs, Jews, Armenians, Yazidis and others reaching into the mist of historical time and we get a flavor of this mosaic in this cookbook.

Not everyone is interested in food history, not even Syrians according to the Salloums, yet as they so correctly point out, one’s heritage informs what one does in the kitchen and why. Understanding one’s own food history makes one a better cook. The Salloums most likely believe that.

Most people eat their food with nary a thought of its historical context. Take dishes such as hummus, baba ghannouj, tabbouleh, falafel, and shish kebab: one eats them without any more thought than that they taste good, but each tells a story. People know these dishes as Lebanese, but Lebanon was part of greater Syria—these are Syrian food because it was Britain and France at the end of World War I that separated Lebanon and Syria into two countries. They are simple foods because the lives of Syrians were simple.

The word “reviving” is important in their title because they write this book with the backdrop of a catastrophic situation in Syria. The death and destruction are so overwhelming that the Syria of the recent past probably no longer exists. So it’s an act of preservation to transmit the food traditions of the Syrian people.

The richness of the book does not stop there as we see from the first sentence of the second chapter “From My Prairie Homestead to My Homeland.” Habeeb Salloum writes “my quest to learn more about Syrian food is an outcome of my childhood on a prairie farm in Canada’s province of Saskatchewan.”

Again, this second chapter of Salloum’s personal story in Canada is worth the price of the book. Salloum’s long culinary journey also included a stint in the Royal Canadian Air Force during World War II where he learned even more about his culinary heritage from leave taken visiting an aunt in Rhode Island who made a never-before-eaten dish called kubba halabee, and Aleppo-style ground lamb and bulgur patty, for him. This door opened wide his exploration of the food traditions of his ancestral homeland Syria.

The third chapter continues the richness of this book as Habeeb’s daughters chime in on their experiences as third-generation Canadians. All these delicious stories before we even reach the recipes that lay expectantly ahead of the reader!

In the “Pantry” section—a necessity in any Middle Eastern cookbook, one can take issue with the claim that bulgur was known since the days of Mesopotamia and that the green hard wheat known as farik was an ancient grain. Bulgur is also a hard wheat product and hard wheat was probably not known by the ancients, certainly not known as a food product with utility, but this is a minor issue and doesn’t affect the book at all.

Every Middle Eastern cookbook must have recipes both familiar and introductory. The Salloums provide both. The basics are, of course, yogurt, labna (strained yogurt), kishk (fermented bulgur-yogurt mix), plain bulgur, plain rice pilaf, and bread dough for making savory pastries. They are all there. There are others one might not be familiar with but will excite you to try, such as sals al-thoum (fluffy garlic sauce—my Palestinian former wife made this with broiled chicken and I still ask her to make it for me). Of course, there are the famous mezze such as baba ghannouj and hummus bi taheena, but also ones the reader might not be familiar with such as baleela, a bowl of chickpeas with cumin, garlic, and parsley.

One is immediately drawn to recipes that one can’t wait to try out in the kitchen—this is a book that will get dirty—such as Abou Bastee (the father of happiness), a dish of lamb, pumpkin, chickpeas with a mélange of exotic spices.

There are all kinds of kibbe (the bulgur and meat stuffed ground meat patties) and kebabs, and kafta (grilled ground meat on skewers) such as the Aleppine kafta kabab bi’l-karaz, grilled skewered meatballs and cherries. There are dishes one has never heard of that beckon, such as baasamshakaat (the bride of Damascus), beef roll-ups stuffed with ground meat, rice, and spices cooked in butter, onions, and tomatoes. There is zunoud al-banaat, which they translate as “Syrian Scotch Egg” but means “girl’s wrist” indicating the diameter of this egg-stuffed meatloaf.

There is not a single recipe that is superfluous or uninteresting. The book is replete with invitations to the kitchen. Not only do I recommend this book wholeheartedly, I can say it is the best Middle Eastern cookbook, bar none, in my 50-plus Arab cookbook collection, a collection that includes stars such as Yotam Ottolenghi and Claudia Roden.