Scenes from the Heartland: Stories Based on Lithographs by Thomas Hart Benton 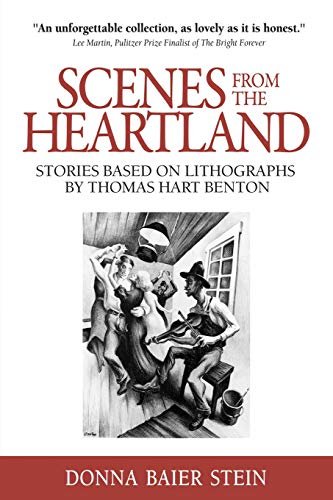 “Scenes from the Heartland is a book to read for anyone interested in American values and history, told in lingering prose that sinks into the soul.”

Donna Baier Stein, in these nine stories, has created a mosaic of life during the twenties, thirties, and early forties. They were not easy years for most of the country, for those in the middle they were particularly hard. We have read about these times, but Stein gives her people dimension and emotions, and looks behind the faces into their thoughts and memories.

Stein does this with strong descriptions of place. “The boy rode a dark horse, crossing a field of yellow stargrass and olive green shadows. A slip of a stream, with logs nearby so recently cut their ends were white and circled with clear, brown rings.” And “On Friday, February 24, rain skated down in silvered sheets, painting long, watery tails on the tall windows of the one-room schoolhouse . . .”

And with characterizations. The Reverend Elijah Berry: “His cheeks were flushed, and his forehead sweaty. His arms akimbo, like a feudal lord surveying his kingdom, . . .” In another story, “He knew what she saw when she regarded him: a wiry black-skinned man with a too-long neck, worn overalls, and creek-washed shirt.”  And, “It was an old man Martha didn’t know from the other side of the church. Dressed in worn overalls, with a tobacco stain dripping from one corner of his mouth.”

The times and places have been thoroughly researched. The fireworks at Christmas in the Negro part of town. “If they didn’t have enough pennies to buy them, his uncle would blow air into a pig bladder, tie the organ tightly, and throw it on the fire for a satisfying explosion.” The cleaning product, Fels Naptha: “The Golden Bar with the Clean Naptha Odor” is scrapped into a bowl and made into a paste for cleaning, and in the summer to relieve the itch of poison ivy.

The sentiments people express, what they want to do with their lives, how they plan to overcome their problems are faithfully rooted in a limited vision of the world, one especially limited for women and young girls. “He promised Ruthann she could go back to school one day. He promised that they would live on his family farm just a few years and return to the city . . . and Ruthann accepted this as the significant gift it was.” In another story, “She [Helen] wanted so much for Walter to love her like she’d first imagined he did . . . She wanted his flirtations to stop . . . even when Helen stood nearby.”

Baler Stein's portrayals are so good one hesitates to quibble, but the beginning paragraphs in a couple of stories are so crowded with characters the reader finds it necessary to reread to nail down the people and their relationships. Once sorted, the characters and stories track very well.

Some of the endings are too pat. A farmer on the verge of bankruptcy uses his last money to dig out a pond. And then the rains came. In another story, a woman who fears her husband is cheating on her finds a bracelet (too small for her) tucked away in a closet. Not to divulge the ending, only that it is not foreshadowed in the story and leaves the story arc incomplete.

Scenes from the Heartland is a book to read for anyone interested in American values and history, told in lingering prose that sinks into the soul.