Scarface and the Untouchable: Al Capone, Eliot Ness, and the Battle for Chicago 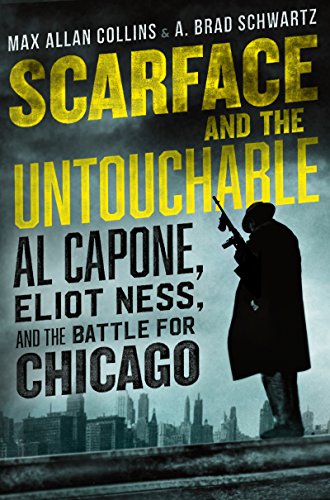 "when the legend becomes so famous, it takes too long for a good read like this one to replace the sensational with the no less amazing facts"

The 1930s gangster Alphonse Gabriel Capone and his crime-fighting nemesis Eliot Ness became such legends as to become the basis of the comic strip Dick Tracy.  Author Max Collins writes "a fact still little noted or known" but "not only is truth stranger than fiction, in this case it's even more compelling than the many lies and exaggerations visited on both."

Max Allan Collins is a Mystery Writers of America Grand Master and author of numerous well-received crime dramas, including a one-man play about crime fighter Ness. He researched with the help of doctoral student A. Brad Schwartz, author of works on the beginnings of fake news in the modern media.

Eliot Ness became a great American hero from his 1957 autobiography The Untouchables. Ghostwriter Oscar Farley radically altered the manuscript and published it after Ness' death and over Ness' protests. Fraley, the authors write, "paid no heed to chronology, and events appeared in what struck Fraley as the most effective order." Thus, even this first nonfiction book began more movie than documentary.

Collins challenges many critics to look at the book "to confirm how surprisingly accurate it was," "surprisingly non boastful," and "readable if creatively rearranged." In Scarface and the Untouchable, the authors argue that the credibility problem comes from creative editing and the myths spawned by subsequent books, movies, and television series.

Having written so much crime fiction, Collins knows fantasy when he sees it. He has issues with "the inaccurate and unfair portrayal of Ness is one; the glorification of Al Capone is another."

Collins and Schwartz let the facts however hard speak rather than the speculation. The book has extensive documentation and a thorough bibliography.

The authors prefer detail. Their account of the infamous St. Valentine's Day Massacre includes even the bullets that "shredded flesh, snapped bone, mutilated viscera, and spurted hot blood." The police and reporters "had seen their fair share of violence, but never such sickening carnage."

That 1929 killing had "the same careful planning and brutal efficiency" as other attacks on the George "Bugsy" Moran gang. Capone received the blame although no one ever went to trial for this slaughter. He "would not hesitate to pull the trigger" "by proxy if not always in person."

Collins and Schwartz point out major problems in the introduction to Scarface and the Untouchable. The rest of the book presents a documented history for the reader to judge the reality of Ness and Capone: "neither of our subjects has really gotten a fair shake."

The authors note how these two antagonists had much in common that represented the first decades of 20th century America. "Both were first-generation Americans, sons of immigrant fathers who worked as bakers" and "each with an impulse to turn his chosen field into a fully modern profession."

Collins quotes Capone "your past holds you" and it did these antagonists. They came from large families and poor ethnic neighborhood—Ness Norwegian and Capone Italian but not Sicilian. Eliot Ness, born in a rail yard and "swamp" near Chicago in 1903, fought Al Capone, born in a poor neighborhood of Brooklyn and only five years older.

"Al Capone had moved in on the Ness family's street" in Chicago. Both men suffered from long-term terminal illnesses. They had, however, only "one phone call and a single face-to-face meeting" in personal contact, neither of which had any significance.

Both men sought a different American Dream. They pursued ambition in an age of fatalism "with energy, charisma, and recklessness."

Collins and Schwartz portray Al Capone as "having applied the methods of corporate business to organized crime." He lived as a man "whose hunger for more of everything—power, pleasure, publicity—drove him from the slums of his boyhood to the pinnacle of luxury."

Yet, Capone "desperately wanted to be liked." Characters like him frequently become celebrities from their controversy and flamboyance. He even hired the man who gave the scars on his face from his days in New York as a bouncer.

Capone sometimes described himself as a "onetime antiques dealer turned professional gambler," although he lost far more at the track than he won. Depending on the occasion, he admitted to or denied being a bootlegger. His personal fortune today from crime of all types would amount to some $280,000,000.

Special circumstances brought down Big Al. Moving from murder to massacre in Chicago gave Capone too much of the wrong kind of notoriety. The Great Depression left a quarter of America's workforce unemployed and the government sought "taking down the nation's most famous bootlegger" as a useful distraction.

Then, Eliot Ness, a government agent "with a growing number of arrests, convictions, and daring undercover work" received orders to get Capone. "Fate and the federal government had found the perfect foil for Scarface Al."

Collins and Schwartz describe Ness as "remarkably mild-mannered, passive, even shy" "an honest, well-educated, professional." He joined a Treasury Prohibition Unit "fighting a losing battle to purge itself of corrupt and inept agents," however.

The alcohol prohibited in America of the 1920s and 1930s included a "flood of poisoned liquor leaving drinkers blind, palsied, and lying dead on the streets." At the same time, gangsters like Capone "only shot each other; but trigger-happy Prohibition agents opened fire at the slightest provocation." The agents killed at least 23 innocent civilians.

Chicago became a bloody mess long before Capone and Ness arrived and reminded so long after they left despite Ness and his untouchables squad having "driven the Capone gang to the brink of bankruptcy." Collins and Schwartz also debunk popular falsehoods about Capone's and Ness' later years.

The truth may not always beat fiction but in this epic book, it reminds readers of situations still relevant today. Unfortunately, when the legend becomes so famous, it takes too long for a good read like this one to replace the sensational with the no less amazing facts.