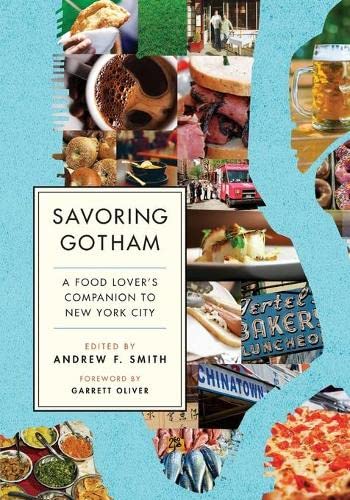 But they couldn’t do it alone. They wrangled nearly 180 of “the most notable NYC food experts” into sharing their areas of expertise within the more than 700 pages of this weighty tome. With approximately 570 entries, Savoring Gotham is the most comprehensive reference work on the history of NYC food and drink.

The list of New York-centric foods is long: Snapple, egg-creams, Borden’s condensed milk, cherry cokes, knishes, Salisbury steak, Haagen-Dazs ice-cream, dill pickles, cheese cake, pizza, and Oreo cookies make up the short list. There are many, many more. Remember, what wasn’t created in Gotham was adopted and popularized to the point that it became primarily associated with New York City, such as New York-style pizza.

From bagels to Waldorf salad, all the iconic foods of New York City are identified, their history and cultural identity are explored and their transitions as tastes changed over generations are examined.  The same holds true for all the noteworthy restaurants and restaurateurs, the personalities in the front and the back of the house, the food purveyors, from pushcarts to huge wholesale and retail outlets, the markets, the celebrities, ethnic foods, films, neighborhoods and even the advertising and publications that promoted them—all finally get the recognition they are due. As the award-winning culinary historian Laura Shapiro said: “This is an excellent and very well thought-out book many, many writers have been desperate to consult for years.”

To give you a brief example, did you know that:

• by 1760 New York was the leading city in prostitution, alcohol consumption, and oyster eating?

• by 1880 New York area oyster beds produced 700 million oysters a year, and that rich or poor, oysters were the unifying egalitarian food of every New Yorker?

• the police raid at the Stonewall Inn causing three days of rioting in Greenwich Village in 1969 marked the beginning of the gay liberation movement?

• wearing its 1920s nickname “The Big Apple” New York is widely acknowledged as the Food Capital of America?

Lest you think Savoring Gotham is just about food, bars, breweries, and distillers get a fair share of space, as do neighborhoods and life styles. Entries such as “gay bars,” “Greenwich Village,” “Hell’s Kitchen,” “Prohibition,” “Harlem,” “Brooklyn,” “Five Points,” and “African American,” among many others, plumb the culinary fringes. Naturally, given Garrett Oliver’s prominence in the brewing field, and the popularity of craft beers and ciders today, breweries get their fair share of attention, too.

The first brewery in New York (then New Amsterdam) was opened around 1632 “on a street which became known as Brewers Street.” By the end of the 1800s the State of New York grew most of the hops for all the breweries in America, 48 of which were in New York City. Early NYC breweries that grew to national recognition were Schaefer, Piels, Schlitz and Rinegold. But today those once prominent names have less recognition than the modern Brooklyn Brewery.

Probably everyone reading Savoring Gotham will find something missing or only mentioned briefly. One of the earliest references to food in New Netherlands’ literature was the theft of a peach by a Native American from a Dutchman’s tree that caused the “Peach Massacre” or the “Peach War.” It is not included in Savoring Gotham.

And while Pansy Bars are mentioned, it is only in one sentence, relegating them to Harlem and Greenwich Village. The Pansy Craze could have used its own entry, placing the widely popular establishments featuring outrageous gay and drag performers squarely in midtown during the early 1930s. This was the peak of homosexual acceptance in America between the wars.

There are other omissions as well, notably that of Jane Brody, cook book author and New York Times columnist, but perhaps with her body of literature leaning more to health and nutrition, she did not make the cut. No matter, there is nothing that can’t be amended and updated in a second edition. Meanwhile, the editors made clear that any book of this sort inevitably had to leave some things out either by design or inadvertence. Then again, the subject may simply be too big to fit in one volume. But what does fit is an exhaustive overview of the rich culinary history of the melting pot of America: New York City.

It has to be mentioned that besides the food and beverage entries, or, more specifically, because of what those entries contain, a good overview of the history of New York City, from the earliest of settlers—the Native Americans—through the Dutch and right up to today’s mix of ethnicities, can be gleaned from these pages. So you may come to Savoring Gotham for the culinary aspects of New York City, but you’ll leave well versed in its local history.

Ethnic foods, native foods, food culture, foodies, celebrity chefs, famous restaurants, restaurant trends, culinary schools and the journalists who chronicle them—all this and much, much more can be found in the pages of Savoring Gotham, A Food Lover’s Companion to New York City.

Richard Frisbie is a travel, cooking, and gardening writer whose work has appeared in a broad range of print and online venues, including EDGE Publications, InsideOut magazine, Examiner.com, and others. He is also owner of Hope Farm Press, editing and publishing regional books on New York State.