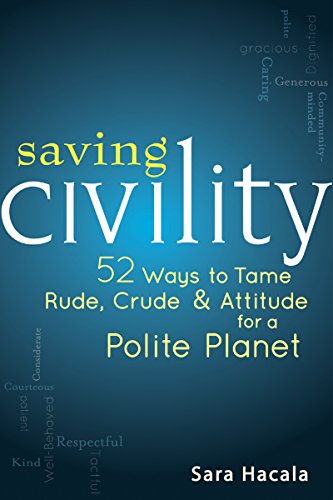 “This is a surprisingly important book.”

When did civility become old fashioned, irrelevant, and archaic? Why are good manners considered unnecessary for survival in today’s social milieu?

As a society, being polite to one another was considered good form, sophisticated, even elegant. Yet, somewhere in the 1960s evolved a pushback to what was considered oppressive by the establishment; it equated etiquette with tyranny. It became fashionable to use bad language, disregard another’s sensibilities, and brandish blatant disgust for anything civil.

Oh, to enjoy a civil discourse once again.

The notion that civility, politeness, and consideration for another’s comfort were disingenuous swept the nation at a time when values were under scrutiny and our nation was at war with itself. The Free Speech Movement, the Vietnam War, and a U.S. president, Richard Nixon, who resigned from office—all took their toll on society. The populace was angry and so went anything “establishment,” including polite, thoughtful, and generous treatment of others.

Yet the presence of civility can tame even the angriest of individuals. When baited with enraged behavior, a calm and courteous response defuses—at some level—the continuation of an inflamed engagement.

So it is that Sara Hacala’s timely book, Saving Civility: 52 Ways to Tame Rude, Crude and Attitude for a Polite Planet, is timely—more necessary now than ever.

This is not a how-to book by any means. It is an easy, well constructed series of chapters dealing with a range of considerations adoptable that apply to our everyday interactions with one another.

Civility is so much more than good manners. Civility allows people to engage in meaningful dialogue, honesty with oneself, and delving into tough subjects with others (think: religion, politics)—all while paying attention to the little things in life that matter.

Who would have thought that simple civility could make such a difference? Moreover, civility can reduce blood pressure and headaches and improve interpersonal relationships—including marriage.

The simple acts of being polite, paying attention to each other’s comfort, and waiting for someone to finish a sentence before jumping into the middle of a conversation actually smooth out the rough edges of day-to-day distress.

On the smallest of actions—that of saying “please,” “thank you,” and “excuse me”—Ms. Hacala highlights the difference in how everyday behaviors can reach far further than just the person to whom they are addressed: sort of a pay-it-forward theory of good manners and their effects.

Considerate, polite behavior replicates itself from one recipient to another. The same happens in reverse in terms of rude and inconsiderate actions—plus, rudeness begets resentment in addition to aggressive or otherwise uncomfortable responses. Ms. Hacala makes the point by saying, “In failing to acknowledge an act of generosity with simple gratitude, we are not only telling people that we take them for granted, but also that they mean nothing to us.”

Journalist Diane Sawyer said, “I think the one lesson I have learned is that there is no substitute for paying attention.”

Ms. Hacala encourages readers to “elevate their social antenna, which, like radar, picks up on the social cues of others.” Sometimes what is not being said is more important than the words spoken aloud.

At the same time, while encouraging listening to others, she logically reaches the conclusion that it is easier to just be nice than otherwise. Niceness has fallen victim to same fate as civility. Niceness is catching, asserts the author, and it makes life so much more pleasant. Nor does it take a lot of effort.

Being nice can pay off in unexpected ways, according to Ms. Hacala. Being nice to everyone encountered at the office could ostensibly result in positive comments to those who can make a difference to your status in the workplace. Treating everyone with the same level of pleasant behavior can turn a bad day around for all the employees. Yes, a smile can make a difference.

Common misconceptions of etiquette are that it is reserved for special occasions or phony behavior by elders. In fact, the definition of etiquette is about “rules that make social interactions and events flow more smoothly,” according to Ms. Hacala.

A contributing factor to the decline of civility can be blamed on the anonymity of the Internet. Writers can spew vulgarities and hate from a safe place behind a computer with no threat of personal retaliation. Such isolation contributes to intolerance in the real world.

Unfortunately, those who participate in such behavior are deaf to the call for a civil society.

Ms. Hacala makes an impressive case that civility is a lot more than just good table manners. She covers a wide expanse of topics beyond what most would consider in the realm of rudeness.

Her perspective takes into account paying attention to a tone of voice, being more patient, being less judgmental, liberally using forgiveness, and finally, celebrating life.

This is a surprisingly important book. The call to action to pay attention to how we treat one another should be required reading for our society. It is a reminder that it is so easy to just step back and behave properly and act considerately in a world that has disregarded the simple things—things that make our personal interactions so much more pleasant.