Saving Alex: When I Was Fifteen I Told My Mormon Parents I Was Gay, and That's When My Nightmare Began 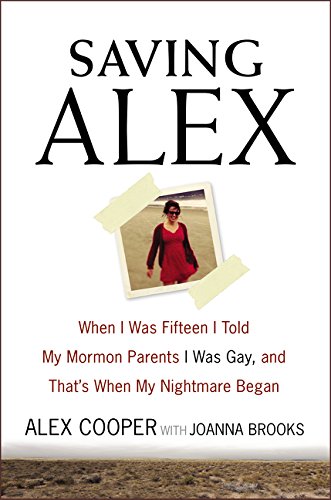 Book reviews can be tricky.

When it comes to fiction, things are straightforward enough. The reader can comment upon whether the author has drawn his or her characters finely enough to make them seem to come alive on the page. And the reviewer can consider the actual narrative, its rhythms, its ebb and flow, the music of the language, and whether the pages seem to turn themselves as the story unfolds in front of a reader’s eyes.

It’s a crapshoot, of course, and one reviewer’s literature may be another’s vapid display of self-indulgence.

Nonfiction is very different. Even when it comes to memoirs.

In some cases, there are actual facts to wrestle with. And historical eras’ actual timelines and famous faces, who may or may not be willing to hand over the facts, preferring instead evasions and myths.

But still in many cases it just boils down to a simple question: Is a good time being had by all? and little else.

All of which is taking the long way ’round before considering Alex Cooper’s new memoir Saving Alex, whose cover copy itself says it all: When I Was Fifteen I Told My Mormon Parents I Was Gay, and That’s When My Nightmare Began.

Saving Alex is a book that perhaps should not be reviewed. It could be written about in the media. Gifted from one family to another. Read aloud from in books stores or community meetings or religious gatherings.

But to review it does it, I think, a disservice.

To review it is to have to answer the usual questions:

Is it well written?

No. In fact, in some sections, it is agonizingly weak in terms of writing and structure, and throughout it maintains a uniformly mopey voice that the co-author, Joanna Brooks, or the editor should have strongly resisted.

Seemingly so. And yet it is more diatribe than treatise. Locations are listed and names are named, but the reader is left to either accept the author at her word or to reject the whole of the document.

While the concept of being “entertaining” may seem a bit of a stretch, Saving Alex does certainly keep the reader’s attention as various methods of “rehabilitating” a gay youth are rather graphically described. The pages do turn quickly, although the persons described never rise above caricatures—Mormons are thugs or accomplices to thugs, fellow gays are brave and kind, etc.

As the subtitle reveals, at age fifteen, Alex Cooper had come to know herself well enough to realize that she was attracted to women. But having grown up in a Mormon family living in California, she knows how strongly—violently—the church resists homosexuality.

What she did not realize, however, was that her family, if forced to choose, would choose the church’s teachings over their child’s happiness and sense of self-worth.

Once they are told that their daughter is gay, the parents fall silent and distant, only to finally come to their daughter with the suggestion that she go to stay with her grandparents in Utah for a while, while the family comes to grips with this new reality.

Alex readily agrees, only to find that the trip is a ploy to deliver her not into the hands of her grandparents, but instead into the house of a Mormon couple who have declared themselves, although unlicensed and untrained, as experts in “Conversion Therapy.”

And the fact that she has been taken to Utah puts her fully in the Mormon Church’s hands. As Alex is told again and again by the couple—their names, we are told are Johnny and Tianna Siale—the fact that nearly everyone in the community was Mormon and had already been prepared for her arrival meant that no one would intervene to help or free her.

After being placed in the couple’s hands, the young woman is brutalized, threatened with her very life, and forced to undergo a series of gut punches, whippings, and systematic religious reprogramming—all while also being forced to act as an unpaid servant in the couple’s home. She may not speak to any of the couple’s many Mormon children. Nor may she do anything but stand with her face to the wall while wearing a knapsack loaded with rocks (to remind her of the burden of her aberrant sexuality) when not cleaning or preparing meals for the whole family.

As Cooper herself relates it:

“Here is the part that chilled me the most, the part that chills me still:  people saw me standing at the wall, and on one said a word. There I was, in the front hallway of the house, positioned between the entryway, the living room, and the kitchen. Throughout the day, whoever came and went from the Siale house walked right by me. Already I knew from my escape attempts that I was invisible, that everyone trusted the Siales, and that I was just another problem kid who deserved whatever she was getting . . .”

Her parents back in California were, of course, paying good money for these “good works” and allowed themselves to remain blissfully unaware of the treatment their daughter was undergoing.

How young Alex Cooper managed to free herself and the actions that she took afterward in coming to grips both with her parents and with the couple that harmed her are the heart of the memoir and will not be discussed here.

What convinces me that the existence of Saving Alex is more important than its flaws is the fact that this book, placed into the hands of a gay youth in a precarious moment in his or her life, might well save that life. Or this book, put into the hands of a set of parents who have just learned that their child is gay and are unsure what to say or do, might well prove to be a statement of what not to do, of what the child needs more than the threats, rejection, or religious persecution that might readily come to mind.

So while Saving Alex—in terms of its writing, voice, narrative (Good Lord, it is not until page 180 that we read: “September 7th of 2010, I, Alexandra Cooper, was brought to live with the Siale family.” And we finally have some idea of when this is set. Until then, the reader has no idea of the when of this book, and how old the author is now.

But when this is revealed and the reader realizes the author would be only twenty or twenty-one today, the almost inept youthfulness of the author’s voice can be forgiven. Saving Alex seems a rather weak memoir, though in terms of the story told, the experiences recounted, it is an important book, one that needs to exist and to be read and shared with any who might benefit from reading it. Including, apparently, the whole of the Mormon Church, which, from its tinkerings with California’s Prop 8 onward, seems to be one of America’s most cruelly bigoted organizations in terms of recognizing and supporting the full human rights (life, liberty, etc.) of the members of the LGBT community.