Save the Last Dance (The Dance with Me Series, Book 3) 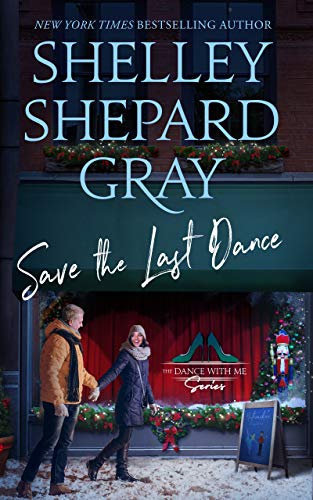 “Save the Last Dance demonstrates how strangers become family with their caring ways and unfailing faith in each other.”

Book #3 in the Dance with Me series has Kimber Klein leaving the high stress demands of a New York City super model to relocate to Bridgeport, Ohio, to live with her newfound siblings. Though she has amassed wealth from her career, she is tired of having to watch her weight and making sure she always looks flawless. When she is given the chance to move in with Shannon and Traci, she is ecstatic.

Kimber had been adopted as a baby, yet when she recently learned about Shannon and Traci, meeting them was the highlight of her life. As an only child to her adoptive parents, she never had much of a family life for they were always busy. Now she's ready to put down some roots in this small town and escape Peter, a man who worked with her on a photo shoot and who has been stalking her.

Kimber volunteers to read to school children at the local library, which is something she loves doing. She believes she is safe in this little town, though her fear escalates when she leaves the building only to discover the tires on her Mercedes are slashed. This appears to be a deliberate act, not just a case of maybe driving over some nails. Could Peter have followed her to Ohio?

Lucky for her, Jeremy Widmer, a high-school student who shelves books at the library for volunteer credits sees she's in trouble. When his foster dad Gunner Law pulls in to pick him up, they offer Kimber assistance. Gunner, who is a mechanic as well as a builder, calls his boss to get her car towed.

A handsome single man, Gunner is in the process of trying to adopt Jeremy, whom he's been fostering for several months. He totally enjoys the 15-year old and hopes to make up for the hard life Jeremy has lived. With Jeremy in his care Gunner's life is full and uncomplicated, that is, until he comes to the aid of this damsel in distress. Fascinated by her, he wants to help in any way.

Burned before, Gunner isn't considering a relationship, but something about Kimber tugs at his heartstrings. His boss Ace picks up on Gunner's sudden concern about her and gives him a bit of a ribbing:

"'She's real pretty, and she seemed sweet too. Not every woman is like that you know.'

"Gunner knew. Avery, his ex-girlfriend, had seemed sweet—until she'd opened up and turned into a demanding, conniving shrew.

"'You got lucky with your wife, Ace.' His wife, Meredith, was one of the sweetest ladies Gunner had ever met.

"Ace's voice brightened. 'True that. Now, I know I'm sounding all in your business, but you've been alone for a while now. You might want to think about giving Kimber a call. She seems like a woman who would be worth your time.'

"She'd been a mystery, that's what she'd been. Beautiful, direct, and confusing. And, most likely far too city for a hick from a small-town West Virginian like him."

As time goes on, Gunner finds himself thinking about Kimber more, and he is surprised to learn she appears attracted to him in return. Though not knowing where her life is leading her, Kimber is settling in well and assisting her sisters in any way she can. They live in the apartment above Shannon's dance studio, which Shannon owns and operates, and because Kimber has a lot of free time, she busies herself helping Shannon while she prepares to put on the production of The Nutcracker for the upcoming Christmas season. Kimber is in awe of her delicate sibling whose life revolves around dancing and she hopes to discover something she's as passionate about for her future.

Gunner's and Kimber's relationship begins to bloom, and she imagines she will be a permanent fixture in the lives of her siblings and even Gunner and Jeremy. She adores the teenager and notices how wonderful Gunner is with raising him. Then, when Kimber gets a call from her agent Brett about a modeling offer that every top model yearns for, she is torn. She doesn't need the income, but this is too good an opportunity to pass up, for it means the prestige of a cover and full spread. Deciding to accept the project, she insists to Brett it's to be her final job. She now has a family she loves, and this is to be her last hurrah.

While back in New York City, Kimber works tirelessly on this assignment yet cannot wait to return to Ohio. Gunner worries constantly about her safety, which she brushes off. After all, she’s lived there for years.

On the way back to her hotel after dinner with Brett, she is talking to Gunner when she is suddenly attacked on the city street. Is her attacker Peter or is this just a random act of someone trying to rob a beautiful woman?

Though this story is based around the Christmas holiday, it can be enjoyed any time of year, and it stands alone from the other two novels in the series. The reader is offered some information on the fostering/adopting process, and also insight into the grueling demands of being a top fashion model—a job that appears to be glamorous, but actually consists of a lot of hard work. A fun and easy read that is character-driven Save the Last Dance demonstrates how strangers become family with their caring ways and unfailing faith in each other.