To Save Everything Click Here: The Folly of Technological Solutionism 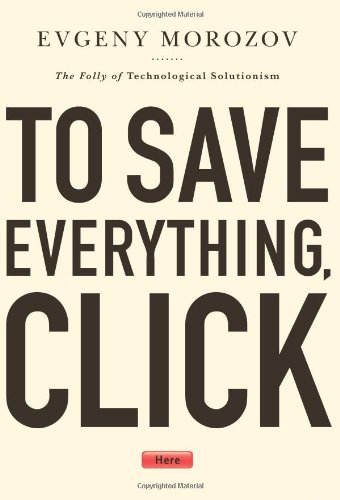 “. . . dogma masquerading as science has dogged humankind like a noxious veil of smoke for centuries.”

By way of basic introduction to Evgeny Morozov it is useful to link him to Marshall McLuhan. It was McLuhan who famously argued that the first wave of mass communication was marked by the omnipotence of the medium itself, not its content: the medium is the message (or the massage as he later put it).

For Mr. Morozov, a similar problem exists in the nature of Internet technology, which, he says, encourages “click here” solutionism and an obsession with Googlesque algorithms and measurable inputs and outcomes.

Mr. Morozov's central point, our toxic embrace of ultimate rationality via the Internet, has been evident well before that first the clunky pre-Internet days of ARPANET in the 1950s. From the ancient Greeks to the Romans, through the Enlightenment, the Nazis, and the enervating economic theories of von Hayek or Freidman, and beyond, dogma masquerading as science has dogged humankind like a noxious veil of smoke for centuries.

Our own era—and the communications revolution that touches us all—is based on what is professed to be an overturning of dogma, specifically religious and scholastic, in a frenzied bubbling of ideas known as The Enlightenment.

Ironically, this movement has been shaped into am obsession with seemingly rational thought and reasoned thinking to the extent that accountants have become the new poets and nerds the new activists.

Mr. Morozov's brand of digital philosophy presciently picks apart the implications. “I feel that such questioning is necessary,” he writes. “Silicon Valley's quest to fit us all into a digital straight-jacket by promoting efficiency, transparency, certitude and perfection—and by extension eliminating their evil twins of friction, opacity, ambiguity and imperfection—will prove to be prohibitively expensive in the long run.”

This expense is not just in monetary terms. In fact, that's the lesser part of it. The cost is to humanity.

Mr. Morozov plays out an unending parade of candidates for his critique, from public transport ticketing to voting structures, from documentary funding to crime prevention. And all, he argues, exemplify the sense that the “audit society” is skewing our cognition of the human experience into something that fits on an Excel spreadsheet, rather than something that unspools through the kind of magical, mysterious, fractal machinery that powers our minds. For Mr. Morozov, the damage is significant if for no other reason than it dehumanizes us and mechanizes our minds.

The metrication of the mind is something certain powers would like to see more of, of course. Political power and consumer economics are easier to apply in a world where everyone not only thinks the same, but thinks according to a readily available and predictable range of factors. Undemocratic politicians and Washington consensus economists have fought for decades to establish just such a norm.

The politics are not lost on Mr. Morozov who, unlike McLuhan, is aware that technology is not in itself a problem—the problem is the people that inhabit it. The Internet (he says there is no single entity and prefers Internets) has as much an ability to do good than harm. Unlike armaments, the Internet is not designed with trouble in mind—not intended by its very technology to do harm.

The political dimension is central. “Herein lies one hidden danger of solutionism,” he writes. “(T)he quick fixes it peddles do not exist in a political vacuum. In promising almost immediate and much cheaper results, they (sic) can easily undermine support for more ambitious, more intellectually stimulating, but also more demanding reform projects.”

Here he seeks to drown out the echoes Hobbesian paranoia about the dangers of a free society, and to counter the kind of thinking developed by Freud on the inherent murderousness of wider society.

Making life like an episode of American Idol where success—neatly defined as fame and fortune—is something can be made like a brick wall (these materials, this plan) can only undermine humankind's potential to face the problems we and our universe create.

But Mr. Morozov himself falters as his sturdy frame tackles various examples of stultifying determinism. Critics of deterministic approaches to anything are brave souls as they risk being hoisted on their own petard.

In gathering material—studies, research, data—to back their case such courageous types can be seen to be floundering about in the same conceptual soup as their targets. In arguing that overly metricated Internet culture is in danger of undermining the very complexity that makes our species so resilient and successful Mr. Morozov occasionally succumbs to the datafication and quantification of his case which he says poisons approaches to the Internet or “Internets,” as he puts it.

Having said that, the material is mightily compelling and such a weakness might be considered in fact evidence of the Internet's ability to find nuggets of truth as much as turds of duplicity when in the right hands.

Evgeny Morozov, his 2010 book Net Delusion, and his ubiquitous media and talkfest appearances around the world, have established a leading position among the Internet's most trenchant, prescient, and readable critics. This latest work only enhances his building reputation.

Despite the aforementioned pitfalls of targeting the problems of data with an array of his own data, his ability to pick examples and case studies from the rubble of academic journals and media output, produced by the very Internet he critiques, is valuable.

Most importantly, he arms you with the tools to assess and to consider the IT environment we all live in.

Mr. Morozov's grumpy, curmudgeonly prose may not necessarily make him someone you would enthuse about as a dinner guest. But when the Internet speaks to us from its growing platforms, you definitely want him looking over your shoulder, contextualizing and deconstructing, making sense of all that backlit information.