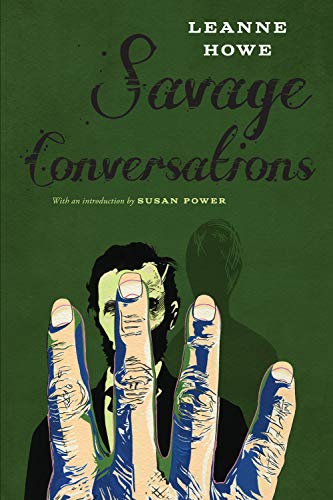 “Real discussions about race are complex, and so is good art. Savage Conversations breaks apart the myth of the Lincolns as white saviors. What lies beneath is dark and often brutal.”

In her introduction to Savage Conversations, Susan Power reminds us that “being Native American in this country means often having a very different take on American history and historic figures generally accepted as national heroes. Just because they’re your figures doesn’t automatically make them ours.”

It’s a crucial reminder in a book that has as its foundation Abraham Lincoln’s order from 1862 to hang 38 Dakota men. It was the largest mass execution in American history.

Leanne Howe balances that public (though often unremembered) crime against Mary Todd Lincoln’s more private crimes: the Munchausen-driven murders of three of her four children, her laudanum addiction, her racist diatribes. It’s Mary Todd and not Abraham who becomes the crucial Lincoln in Savage Conversations. Abraham is dead throughout. Mary Todd is institutionalized (as she was, for insanity, in 1875), ranting at the specter of an Indigenous man, the “Savage Indian,” a delusion that she claimed tortured her nightly.

Mary Todd’s historical fixation on a “Savage Indian” powerfully recalls the deaths her husband ordered. A deep horror plays itself out, again and again, in history and in Mary Todd’s mind. Private events and hidden/forgotten ones scream for attention.

Savage Conversations is a striking hybrid, a play in verse never meant to be staged, a novel that resists prose structure, a series of scenes that encompass the unseen. Three characters appear: Mary Todd, in tattered nightdress; Savage Indian, one of the hanged Dakota men; and The Rope, “both a man and the image of a hangman’s noose.” Mary Todd is almost constantly aware of Savage Indian. The Rope lurks, tangible but rarely acknowledged, beside them both.

Savage Indian functions as a hybrid figure. His name and Mary Todd’s fear of him recall the “Indian Savages” cited in the Declaration of Independence as one of the great threats to America. Howe uses his name to recall the extent to which American “civilization” has been constituted in contrast to the continent’s indigenous population, whose own laws and civilizations were decimated to sustain America’s expansion.

Savage Indian is savage only in Mary Todd’s conception of him. He speaks gently, offers prayers, and grieves the consequences of both her actions and his. When he discovers that “she’s found the laudanum again,” he throws it “out the window, / Accidentally killing Nightjars, / A wandering skunk, / Two field mice. / Even the grass wilts in sorrow.” While Mary Todd sleeps, Savage Indian prays for each lost life.

Savage Conversations is not a book “about” the mass hanging. Mary Todd rarely mentions the deaths directly. Savage Indian speaks of those deaths in verse, in personal terms, using both English and Sioux words, while Mary Todd ignores him. More often, Mary Todd speaks of her marriage and her children’s deaths. She speaks of her own possible self-induced suffering. The hangings are only real to those to whom they happened. To Mary and to white America, they are odd, haunting echoes that prevent psychic peace.

Mary’s relationship with Savage Indian is odd and intimate. Though she claims him as her torturer, though he mutilates her nightly to fulfill her delusions, the violence seems more important to her than to him. She begs for it. He obliges. The harm he causes, slitting her eyelids and scalping her, vanishes each morning. Though it’s the only violence enacted on the page/stage, it’s measurably unreal. It is Mary Todd’s fantasy, part of her desire to absolve herself and her husband from a violent racial legacy.

Real discussions about race are complex, and so is good art. Savage Conversations breaks apart the myth of the Lincolns as white saviors. What lies beneath is dark and often brutal. It’s a crucial book, made all the more essential by the recent success of George Saunders’ Lincoln in the Bardo, which reinforced Lincoln’s martyr status while drawing a veil across the likelihood that Mary Todd’s determination to “treat” their son Willie with laudanum hastened his death.

Indigenous writing sits on the very edge of American literature. Without it, the narrative is a fragmented one, telling less than a useful truth. In Savage Conversations, Leanne Howe adds a difficult, necessary territory.