A Savage War: A Military History of the Civil War 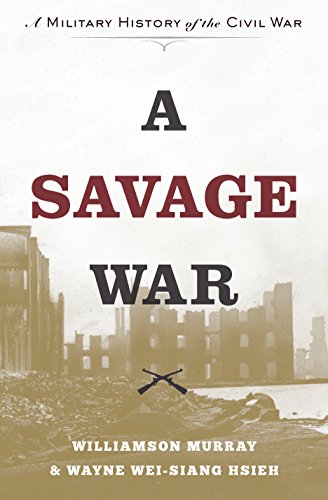 The major insight of this new and interesting military history of the American Civil War is the overriding importance of the Union’s ability to effectively project military power across continental distances. This required industrial capacity, numerous well-trained and experienced soldiers and sailors, competent generalship, and political will and patience. In the end, the combination of these factors enabled the Union to win what Williamson Murray and Wayne Wei-siang Hsieh rightly call a “savage war.”

Murray, professor emeritus at Ohio State University, is a well-respected author of numerous books on military history and strategic studies. Hsieh is assistant professor of history at the U.S. Naval Academy. Their book is not a complete military history of the war; the battles fought in the far western Trans-Mississippi region, such as Wilson’s Creek, Glorieta Pass, Mansfield, Elkins Ferry, and Pea Ridge, barely get a mention.

The authors focus, instead, on the major battles such as Forts Henry and Donelson, Shiloh, Stones River, Vicksburg, Chattanooga, Chickamauga, the Atlanta Campaign, and the “march to the sea” in the Western theater; and First and Second Manassas (Bull Run), the Seven Days, Antietam, Fredericksburg, Chancellorsville, Gettysburg, the Overland Campaign, the Shenandoah Valley battles, Petersburg, and Appomattox in the Eastern theater. They also discuss the Union blockade and other naval aspects of the war.

Using their vast knowledge of military history from ancient times to the present, the authors, in their words, “examine the major factors that explain the course of the military campaigns and operations in the widest sense.”

The Union had significant advantages in population size, industrial might, financial resources, naval forces, and political leadership. The authors judge the self-taught Lincoln to be a much better war leader than Jefferson Davis who had previously served in combat during the Mexican War and as Secretary of War.

“As a political leader and strategist,” they write, “Abraham Lincoln earned his reputation as the greatest of all American presidents . . .” Lincoln’s greatest strength was his willingness “to see the struggle through to its terrible conclusion.”

The war’s geography favored the Confederacy. Murray and Hsieh point out that Union forces needed to subdue an area greater in size than Britain, Spain, France, Italy, and Germany combined, along with a lengthy seacoast.

The authors of A Savage War join a growing chorus of Civil War scholars, including Herman Hattaway and Archer Jones in How the North Won (1991) and David Eicher in The Longest Night (2001), in placing greater emphasis on the West as the crucial theater of war.

“[T]he Union won the war,” they conclude, “in the West.” The key battles were not Fredericksburg, Chancellorsville, Gettysburg or Antietam, but Forts Henry and Donelson, Vicksburg, Chattanooga, Nashville, Atlanta and Sherman’s march to the sea.

Was the Union victory inevitable? No, say the authors, explaining that “[c]ontingency and chance are the great determinants of history.” As Clausewitz wrote, everything in war is simple but even the simplest things are difficult. The friction of battle, the intangibles of leadership at both the military and political level, the respective “cultures” of the opposing armies, and pure luck all played a role in the outcome of the war.

In the end, the two indispensable leaders of the Union victory were Lincoln and Grant. “Lincoln’s political genius,” the authors write, “was as important as his strategic genius in keeping the Union on a coherent course that combined . . . the internal demands of politics with the maintenance of the war effort.”

Grant understood better than any other general on either side the nature of the war and the harsh realities of how to win it. His seizure of Vicksburg cut the Confederacy in two and assured Union control of the Mississippi River.

After capturing Chattanooga and control of southeastern Tennessee, Grant launched a pincer-like assault on Confederate forces by sending Sherman to seize Atlanta and march across Georgia, ordering General Phil Sheridan to lay waste to the Shenandoah Valley, grinding down the Army of Northern Virginia in the brutal Overland Campaign, and tightening the blockade of the Confederacy’s key ports.

Air Force General Curtis LeMay once explained war as follows: “You’ve got to kill people and when you kill enough of them, they stop fighting.” Lincoln and Grant understood that and waged the endgame of the Civil War accordingly. That resulted in the physical destruction of the Confederate armies and brought home to the Confederate population the harsh reality that “it was in the reach of Northern military power to dispossess them of their homes, their lands, and, if necessary, their very lives.” It was only then that the savage war ended.