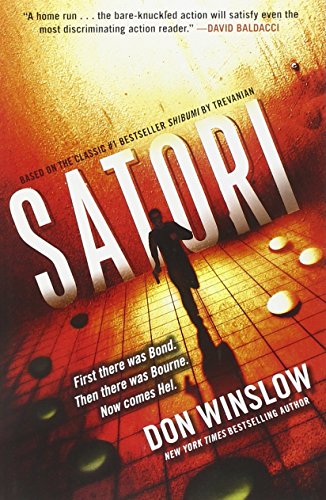 Few thriller authors have attained the cult status of the late Trevanian. This in spite of the fact he published only three true thrillers, two being thinly disguised genre spoofs, The Eiger Sanction and The Loo Sanction featuring Jonathan Hemlock, and the third, Shibumi. His seminal work introduced the world to Nicholai Hel, a masterful assassin and near mythic figure that Trevanian never brought back to the page after introducing him in 1979. When the author died in 2005, it seemed his greatest creation would die with him—until now, as Don Winslow masterfully reintroduces and reinvents Hel in the prequel, Satori.

That’s an incredible feat in its own right, since at first thought Winslow’s bold, rhythmic style so beautifully on his display in his last two efforts (The Gentleman’s Hour and Savages) would seem a poor match for Trevanian’s more staid, angular prose. But Mr. Winslow doesn’t just channel Trevanian, he essentially becomes him, matching his style, cadence, and tone to a perfect T.

Shibumi was brilliant yet flawed, layered with stodgy passages of internal monologue and long philosophical diatribes on the search for meaning in life. In taking Hel back to his roots and first work as an assassin, Satori suffers from no such minutia as Hel swiftly reaches China and sets his sights on a Russian target with whom he enjoys an especially sordid past that includes the deaths of Hel’s adopted Japanese parents.

“Just last night,” Hel reflects early on, “I killed two men here and now there is not a trace, as if it never happened. . . . In killing these men I died myself; in my surviving they live in me. I fulfilled their karma, and they mine. It will be the same with Voroshenin.”

Years before Hel had actually killed his own surrogate father to save him the ignobility of hanging at the villainous Voroshenin’s hands. He then spent three years as a prisoner of the equally fiendish CIA, until being offered an opportunity to gain his vengeance on the Russian while serving his captors’ interests at the same time. So off to China he went in the guise of an arms dealer to gain access to his intended victim.

Structurally, it’s here that Satori bears its greatest likeness to Shibumi, in which Hel was drawn out of retirement by the coincidental murder of his niece. For Trevanian, as well as Mr. Winslow, the personal trumps all. And the assassination sequence set in a Beijing of 1951 at the height of the Cold War forms a brilliant set piece in which Hel’s status as a master in hoda korosu (“the naked kill) and Winslow’s talents as a writer are equally on display.

Like the older Hel, the younger approaches his work with a Zen-like detachment. First comes a lengthy recovery from plastic surgery to repair the damage done by the same CIA outliers for whom he is now working. Then, once in China, he runs afoul of the especially brutal head of the Chinese secret police and finds, not surprisingly, that those be-hind his assignation are cloaked in their own shadows and subterfuge.

Watching Hel lay waste to the men who’ve betrayed him makes for great fun every bit the equal of the older Hel’s comparable efforts in Shibumi. His character may well have given birth to loner heroes across the board from Jason Bourne to Jack Reacher. Gunfighters essentially who can’t hang up their holsters—no matter how hard they try. Like them, Hel only wants peace, in this case a spiritual harmony known as Satori. The tragedy and the beauty of the tale lie in the fact he will never truly find it because his old world won’t let him.

Mr. Winslow, on the other hand, builds an entirely new world by tempering his more typical ribald zaniness in favor of smooth and unstilted language that fits this story perfectly. As a result, in the rarified world of characters outliving their creators, Satori is certain to please even the most ardent of the Trevanian faithful.

Reinventing a near iconic character is a difficult task indeed, but it’s one that Mr. Winslow embraces with a skill and aplomb befitting the pro that he is. Our iconic character here is like a chameleon: comfortable in a variety of skins and looking equally good dressed in any of them.