The Satapur Moonstone (A Mystery of 1920s India) 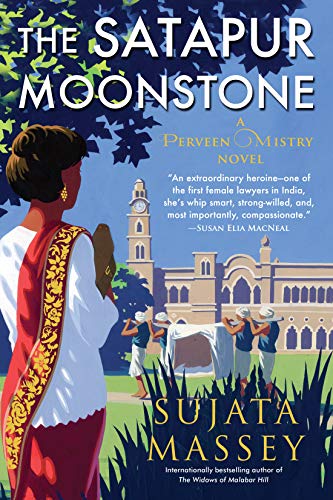 “The Satapur Moonstone is a flawless gem. Historical mysteries don’t get any better than this.”

During India’s rainy season in 1922, a crisis arises in the remote princely state of Satapur. A curse seems to have overtaken the royal family, resulting in the death of the maharaja and followed shortly thereafter by a tragic hunting accident that claimed the life of his teenage son.

A younger son, Jiva Rao, has been crowned the new maharaja, but he’s only ten years old and will not be able to begin ruling the tiny state for another eight years. In the meantime, decisions are being made by the British political agent, Colin Sandringham, and Maharaja Jiva Rao’s uncle, Prince Swaroop, Satapur’s prime minister.

The crisis centers on a decision to be made about the young maharaja’s education. His mother, the widowed maharani Mirabai, wishes her son to leave India in order to attend school in England. However, his grandmother, the dowager maharani Putlabai, still rules the royal household and insists her grandson will remain in the royal palace to continue his education under an elderly, rather unfocused tutor.

Complicating matters is the fact that the two disputing maharanis observe the Hindu custom of seclusion known as purdah and are inaccessible to the political agent, Sandringham. In order to resolve the dispute, a female investigator is needed to interview all parties and hand down a ruling on the maharaja’s future.

Enter Perveen Mistry, Bombay’s only female lawyer. Hired by the Kolhapur Agency, the branch of the civil service that holds authority over princely states such as Satapur, she travels from Bombay to investigate the situation and make a decision on the young maharaja’s education. However, people begin to fall ill all around her, the maharaja’s life is endangered, and Perveen herself becomes a target of the mysterious forces working to take control of Satapur for their own dark purposes.

The Satapur Moonstone is Sujata Massey’s second novel in the Perveen Mistry series, set in 1920s India. It follows the highly successful debut The Widows of Malabar Hill. Massey has also written a series of 11 novels set in Japan and two other books related to India.

In this novel the author skillfully evokes the cultural, political, and social atmospheres of small-state India during the time period in question. The food, the clothing, and the rugged beauty of the Sahyadri mountain region jump out from every page in vivid detail.

The author also does an excellent job in the opening chapters setting up the various constraints under which Perveen must perform her duties. Not only will she have to find a way to overcome the barrier of being a professional woman in a society dominated by men, but she will also need to balance her employer’s service to British interests with her own burgeoning support for Mohandas Ghandi’s activism against British domination. Then there are the problems related to transportation within the tiny state, social divisions between the royal class and the poor people who must help Perveen in her task—the list goes on and on.

The novel is very nicely organized into thirds, avoiding the structural problems that complicated The Widows of Malabar Hill. In the first third Perveen makes her way from Bombay to the palace, via the British agent’s circuit house; in the second she investigates the situation at the palace and reaches a decision regarding the maharaja’s education; and in the final section she puts together the pieces of the puzzle and solves the mystery of the deaths that have plagued the royal family.

The story flows, maintaining a steady pace that keeps the reader fully engaged. Perveen is a wonderful protagonist, flawed and endearing, and we care about what happens to her as each page turns. The secondary characters, including the British agent Sandringham and his employee Rama, are round and well drawn.

Parenthetically, Soho Crime book designer Janine Sagro once again has created an aesthetically appealing frame for Sujata Massey’s story, following up on her attractive design for The Widows of Malabar Hill.

Simply put, The Satapur Moonstone is a flawless gem. Historical mysteries don’t get any better than this. Sujata Massey takes us into a world that fascinates and entices, and she gives us a protagonist whose company is warm and welcoming. We can only hope, with appropriate fervor, that there’s more to come in the near future in this well crafted series.