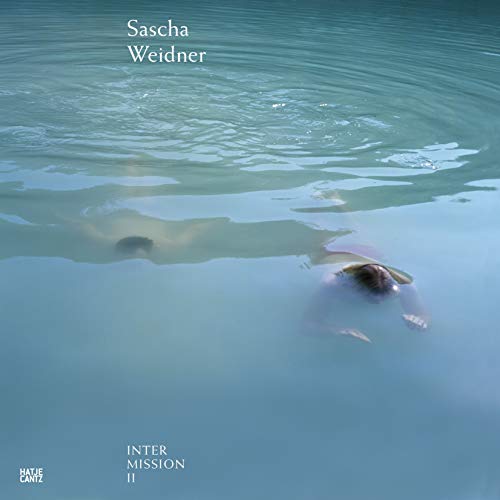 “echoes with a vision of the otherworldly, and a kind of purity where gravity has no pull and people float in a world of color and abstract beauty.”

Sascha Weidner: Intermission II is a collection of color photographs about the in-between moments—the time when there is a pause in our lives that leads us to introspection, observation, and seeing visual coincidence that transforms metaphor into insight.

Weidner attempts to use those moments as a lightning rod to our subconscious. He succeeds in evoking visual poetry by utilizing everyday events to touch on the meaning of awakening, being exuberantly human, aloneness, connecting with others, and being young.

He often uses an extensive depth-of-field where sharpness extends from foreground to background, or turns images upside down as with two men lying on the grass which becomes their sky, or turns images on their side to communicate his intent. It gives us a very different way of seeing the world.

Weidner frames everything with a regimented square format and often poses young men either partially or entirely facing away from the camera, in hoodies, or with heads cropped out of the image.

Although the printing of the book itself features excellent saturation of color, this collection of images generally borders on the commonplace in terms of lighting and perspective. They appear to be direct from camera as fairly straightforward prints that exhibit little or no darkroom techniques, such as dodging or burning to enhance them. Content is all. The most daring use of lighting is an occasional flash strobe to illuminate night action.

The images that are most compelling are the ones that are sufficiently abstract to become fascinating compositions with effective use of color and a sense of mystery. Weidner’s inclusion of himself in his images differs from Cindy Sherman in that he does not flaunt a costume or other persona, but merely adds a figure in a scene that would otherwise be devoid of a human presence.

Occasionally he will place a figure into a scene, seemingly at random, that is isolated or disconnected from anything in the scene, and we are left with an unfulfilled sense of striving for connection and communication. For instance, he will place a flash-lit figure in the composition foreground with everything else lit by ambient light or surrounded by the total darkness of a hillside at night. All are equally in focus.

The images in the book are divided into four chapters. He makes excellent use of color in Chapter III and it has the most intriguing assortment of images. It echoes with a vision of the otherworldly, and a kind of purity where gravity has no pull and people float in a world of color and abstract beauty.

But it is followed by Chapter IV, where there is the contrast of all-consuming fire, disaster, accident, and aloneness. Chapter IV leaves little to the imagination and perhaps it is the essential contrast of alternatives that is his main statement.

Although Sascha Weidner passed away at 41 years of age in 2015, his images in Intermission II reflect the impulses and concerns of youth. He created images that touch on the need for a personal connection that continues to elude us, and the solution is to escape to a very different way of looking at the world.

Much more than other photo books Sascha Weidner: Intermission II requires that all of the images from start to finish be taken into account to arrive at a conclusion of the photographer’s narrative. If one considers this book a “traveling exhibition” between covers—where each image, regardless of its weakness, adds to the cumulative impact and conclusion of the whole—it allows us to be more understanding of the images that are of a lower or mediocre quality than one would expect. It is impossible to know whether the choices were those of an editor or the artist himself before his death.

Sascha Weidner: Intermission II is expertly printed by Hatje Cantz on matte paper with a excellent saturation of color. All the images are printed large, each one to a full-page size of 9.5 inches square.