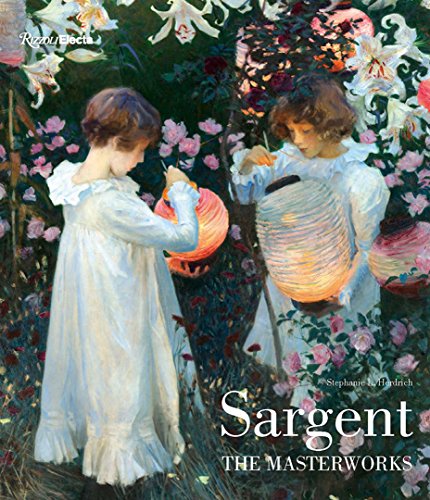 It is written by assistant curator of American painting and sculpture at the Metropolitan Museum of Art, New York, Stephanie Herdrich, who lends her vast expertise to this project. An academic she may be, with a doctoral degree and a certificate in curatorial studies, but she writes in a style that is ultimately fluid and accessible.

Herdrich has broken down her subject into three general sections corresponding with Sargent’s productivity. Sargent in Paris and Beyon’ encompasses his early career to 1887; Professional Success travels with Sargent to the United States and England from 1887–1925; and Beyond the Portrait Studio elaborates on his personal interests during 1900–1925. There is also a Chronology at the end to help track key developments.

Each section follows the same format with an essay, accompanied by archival quality photographs, followed by a series of full color reproductions of key paintings. From portraits such as Dr. Pozzi, Madame X, and Lady Agnew of Lochnaw, to scenes of Monet Painting by the Edge of a Wood, Gassed, or Siesta, Herdrich walks the reader through her carefully selected gallery. The material she presents is easy to follow and it is a pleasure to flip between the plates and her commentaries.

Clearly this is an introduction to Sargent, from which Herdrich has intentionally held back depth, analysis, and interpretive layers. Beyond some minor social commentaries, the focus is on facts, figures, composition descriptions and how the completed work was more or less received in its day. His full-size Madame X portrait, for instance, lovely as it seems to us today, was scandalous and cost Sargent many prosperous commissions even though he considered it his best work.

Herdrich deliberately choose to rely on the fanciful lifestyle of Sargent’s intriguing artistic personality and left the meaty art history excesses for the plethora of other volumes on the subject already lining the shelves.

That Sargent was a bit of an enigma in his day is an understatement. Herdrich quotes his puzzling combination as “an American, born in Italy, educated in France, who looks like a German, speaks like and Englishman, paints like a Spaniard.” All he ever did even from childhood was travel, draw and paint. There is no evidence of any other occupation, and he was not a family man himself although he spent time with friends and extended family.

He had two distinctive painting styles. Similar to many historical artists such as Francisco Goya (1746–1828), who’s day job was to serve as the premier court painter to the royalty of Spain. But who experimented in private with personally impactful motifs, compositions and applications. So Sargent made a name for himself creating portraits of high society families. On the side, though, he craved murals, landscapes and the informality of a friendly genre scene.

His portraits he rendered in a modernized version of classical realism reminiscent of Jan van Eyck (c. 1390–1441). But his natural inclination seems to have been a freer, looser impressionist style that was, at the time, considered avant garde and controversial. He was certainly influenced by Monet as well as the exposure he gained from his international travels.

Beloved in England, France, Italy, and even more so throughout the United States, Sargent’s oeuvre is in permanent public and private collections all over the world. Sargent: The Masterworks is a brief yet solid invitation to become acquainted with a master.