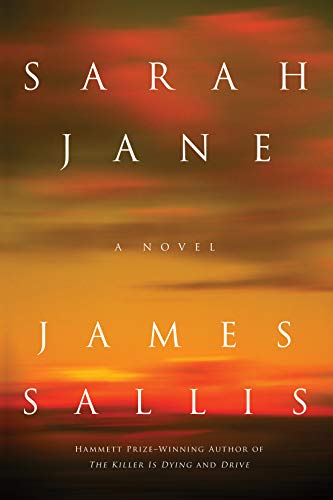 “Lit with insight, affection, and the deep tenderness that can accompany long-term grief, Sallis’ Sarah Jane is that most unusual of mysteries: one that investigates the soul, walking.”

Author James Sallis (Drive; The Killer Is Dying) is often called a master of noir, so it’s no surprise that Sarah Jane is a crime novel. But tenderness? Intense personal loss as felt by a vulnerable woman? By the fourth page, Sarah Jane’s revealing the hole in her heart, on the pages of a journal meant only for herself, as she recalls her one and only, very private experience of childbearing:

“Six hours after I had her, two or three in the morning, they told me they’d done all they could but my baby had died. They brought her for me to hold, wrapped in a pink blanket. Her face was ghostly white. Had she ever really lived? An hour after they left, I was gone.”

Sarah Jane got a military past as well as a hardscrabble youth, but most importantly she’s had firsthand experience of how a “good man at heart” can become abusive of a woman. For instance, there’s “R.H.,” who believed in what he was doing, and in himself, but couldn’t handle when things didn’t go the way he wanted to. “He felt his world unraveling, loose ends flying every which way That grinds on year after year, you see the worst of people day by day, you change.”

This kind of insight works in Sarah Jane’s favor when she becomes a small-town sheriff, the kind who both understand the criminals on her turf and knows how to catch them. Tough and private, she keeps most of her past secret from even her closest colleagues. And as her story unwinds, there’s also her loyalty to the people that, against her will, she comes to love—and that’s what drives her. In a rough little rural town like Farr, where she settles almost against her will, any vulnerability in your heart can threaten your life, one night or another.

Sarah Jane’s narrative of her past and her confrontation with the present are interrupted by flashbacks to her childhood on a chicken farm, and by reflections like this: “All stories are ghost stories, about things lost, people, memories, home, passion, youth, about things struggling to be seen, to be accepted, by the living.” Does she count herself as ghost or living? How can anyone walk forward with such sorrow and loss?

Little by little, one sideways reference or clue after another, the crime at the heart of the book emerges. And a silence builds, as large as the loss that Sarah Jane’s still carrying. Is it Sarah Jane’s own, or does it belong to one of the dead men she’s seen?

Lit with insight, affection, and the deep tenderness that can accompany long-term grief, Sallis’ Sarah Jane is that most unusual of mysteries: one that investigates the soul, walking.