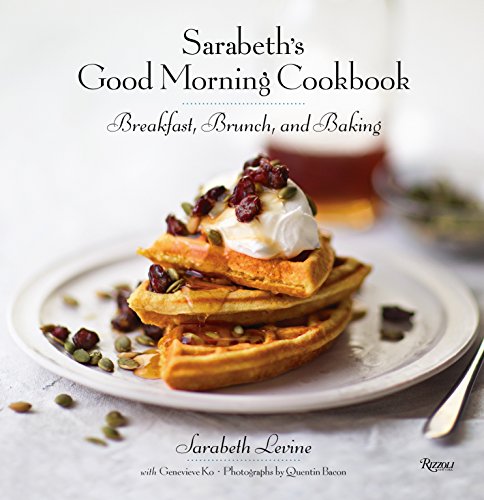 “nothing too exotic, but with just enough of a twist to keep bakers and breakfast-eaters happy.”

When Sarabeth Levine writes a cookbook, she goes for oomph—her second book, Sarabeth’s Good Morning Cookbook, nearly matches her first at a hefty four pounds. The new book tracks the first in other ways, too: nice recipes that rest easy on the palate, without too many surprises but strong execution throughout.

“Nice” is the word that kept coming to mind throughout the reading and testing of this book—genuinely so. These recipes provide gentle flavors and nice presentations that feel pampering but not pretentious for morning meals—whether just for yourself or for the sort of brunch we mostly dream about in an overscheduled world.

Levine opens with a brief list of crucial ingredients and tools. A few of her preferences can be frustrating, such as clarified butter, superfine sugar—sometimes hard to find and pricey, and annoying when only a few tablespoons are needed—and fresh yeast, with a substitution of regular dry yeast rather than the instant yeast now widely available, which would let bakers skip the proofing step. But she avoids calling for many esoteric or precious ingredients.

For the most part, Levine offers precise recipes, including ingredient weights (which by now should be standard in any baking book). Readers may sometimes wish for a bit more description or explanation—what temperature, for example, should a yeast bread test at, rather than relying on the imperfect “tap on the bottom” test for a loaf? Or why, when a recipe calls for creaming butter, does she start with chilled butter? It’s possible to find arguments for using chilled butter instead of softened—but testing her Lemon Yogurt Bundt Cake, for example, required far more than the six minutes of beating to achieve a “very light in color and texture” result—and was the same amount of time and expected result called for in the Marble Cake recipe, which began with room temperature butter.

And even knowing that many of the recipes offer gentle flavors, bakers may wish for a bit more. “Great Bread,” which starts with a cornmeal mush, offers a fine-crumbed loaf that is just fine, but doesn’t really live up to its name. And the yeasted sour cream dough seems less than the sum of its parts: The rich ingredients—sour cream, vanilla, egg yolks, whole milk, and butter—seem to nearly cancel one another out. Savory Spirals made with the dough were fairly standard dinner rolls, and Mini Pastry “Bagels” from the same dough were cute but not exciting.

Overall, though, these are easily remedied concerns for bakers with at least a little experience. The rich, creamy, cheesy Spinach-Gruyere Quiche, for example, had a great crust that needed only a little doctoring. This was another case of not living up to the name—the crust came from a black pepper-Parmesan dough that contained a mere ¼ teaspoon ground pepper for two crusts. Add more pepper and a little patience, though, and you’ll find a pretty terrific crust. Made with oyster cracker crumbs, in a dough that creams the butter rather than cutting it in, this crust is less intimidating because it’s harder to overhandle it, but also harder to roll out; the cracker crumbs tend to tear the dough. It patches well, however, and did produce a crisp, otherwise flavorful crust.

Other soothing morning flavors that did not need tarting up include the simple but good Margherita Frittata and Shrimp and Tarragon Frittata.

Levine opens the book with barely-there recipes—“Citrus Sundial” is nothing more than grapefruit and orange sections on a platter, topped with a dollop of yogurt and a sprinkling of homemade granola. Surely anyone who purchased this tome does not need a recipe like this—and yet will be tempted by its appearance. A “Morning Fruit Bowl” seems similarly unnecessary, with nothing more than a small grapefruit, an orange, a banana, and four strawberries—again, it’s all about the presentation.

These are just a small sampling of the recipes—which range from whole grains (including oatmeal, hot cereals, polenta, granola), griddle cakes and waffles, baked goods—scones, muffins, quick breads, coffeecakes, and yeast breads, to savory dishes of eggs, potatoes, meat, fish, soups and salads. And, of course, some jams and other spreads—how Levine got her start—and even a few quick pickles.

Her recipe for “flaps” stands out in this mix—she was aiming for a thin pancake, cakey, not eggy like a crepe. The tested recipe was a bit thick to spread on its own in the pan, but a little experimentation to spread the batter with the scoop worked well to produce a flat-but-fluffy pancake that made a great vehicle for a simple butter-brown sugar topping, or a more substantial filling of a fried egg and cheese.

The flaps use Levine’s pancake mix for a base—a basic recipe with richness from cold butter cut into the dry ingredients. She uses the same cut-in method for waffles, interestingly, instead of melted butter, producing crisp, delicate waffles. In a nutshell, that’s Levine’s way—nothing too exotic, but with just enough of a twist to keep bakers and breakfast-eaters happy.