Sapiens: A Graphic History: The Birth of Humankind (Vol. 1) 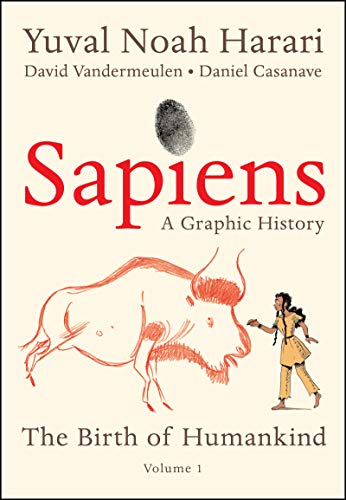 “A powerful story of our earliest days as a species.”

In this graphic adaption of his bestselling Sapiens: A Brief History of Humankind, Yuval Harari uses the graphic format to explain a complicated history in an accessible and appealing manner. The book is wide-ranging, covering human evolution and how homo sapiens became the dominant, then the only, species of hominins on the planet. Why did much stronger neanderthal man disappear? What happened to homo erectus, the first of the human species and an experienced tool user? What gave homo sapiens such a big advantage? The many threads are woven together expertly and brilliantly, creating a powerful story of our earliest days as a species.

A cast of scientists explain different aspects of the story, starting with Professor Saraswati, a biologist. “Until recently,” she says, “we were insignificant animals somewhere in the middle of the food chain. Then we suddenly jumped to the top.” This meteoric rise came with a cost—not for homo sapiens but for other species. “It took eagles and sharks millions of years to gradually reach the top of the pyramid. That gradual process meant the ecosystem could develop checks and balances to prevent lions and sharks from wreaking too much havoc.”

There was no such brake on sapiens, not thousands of years ago and not today. But what made them (that is, us) so successful? Harari offers several theories, beginning with “their superior technology and social skills.” But what really set them apart was something he calls a “cognitive revolution.” Other human species, as well as gorillas, chimps, and apes, had simple language, sounds that warned of danger or alerted others to food. But homo sapiens developed language that did much more than that —they could tell stories. These stories started with gossip, which laid out social structures, who was trustworthy, who was dangerous. As another guest expert puts it, “The most important information humans exchanged wasn’t about lions or bison—it was about humans themselves.”

The storytelling wasn’t limited to gossip, however, but went beyond individuals to create myths, religions, and shared values. This was the real edge that homo sapiens had: “Sapiens rule the world because they’re the only animals capable of creating and believing fictional stories. And as long as everyone believes in the same fictions, everyone follows the same rules.”

For Harari, these stories take the form of religion, laws, cultural norms. The way he presents it, it’s the ability to tell a compelling story that has given sapiens such an enormous edge. But one could argue it was more than that. Sapiens’ language allowed more than powerful narratives, it allowed abstract thought. You can’t care about “justice” or “patriotism” unless you understand what those concepts mean. They aren’t objects you can point to, yet even very young children have a deep-rooted sense of what’s fair (and what’s not), an instinct we inherit from our sapiens ancestors. This distinction between complicated abstract concepts and concrete objects is glossed over by Harari, but he otherwise tells his own compelling story, that of our own ancient history.

The book ends with homo sapiens being put on trial for the mass extinctions the early species caused tens of thousands of years ago. The evidence is strong, but what’s most interesting about this case is how Harari brings it into the present, proving the continued effects the one human species has on the entire planet. It’s a sobering thought, but the book doesn’t leave the reader feeling defeated. Rather we’re inspired by a better understanding of our ancient heritage and the positive differences we can make—if we choose.