Sandy Hook: An American Tragedy and the Battle for Truth 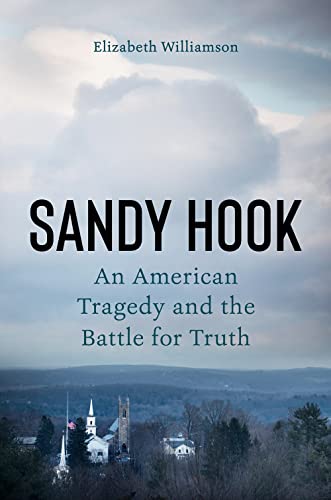 The title of this book could be misleading. It suggests a deep dive into the twisted mind of the Sandy Hook shooter, one Adam Lanza, 20, who in 2012 used a Bushmaster AR-15-style assault rifle his mother had bought him to murder 20 small elementary school students and six of their teachers in Newtown, Connecticut.

But this is not a true crime book—in fact, it’s more of a false crime book. As with Mark Oppenheimer’s Squirrel Hill (about the synagogue shootings in Pittsburgh), it takes up its story not with the horrific incident but its aftermath. Oppenheimer wrote about how the Squirrel Hill Jewish community came together. Williamson, a New York Times feature writer, centers on the massive disinformation campaign that managed to convince millions of Americans that the Sandy Hook killings never occurred.

The central characters, then, are not Lanza or those 20 kids, though we get deeply affecting portraits of some of them. Instead, the book is focused on conspiracy monger Alex Jones of Infowars.com and Lenny Pozner, father of Noah, who made it his mission to “deplatform” Jones and others like him from Facebook, YouTube, and other social media channels.

Jones was not the first person with a megaphone to proclaim that a massacre was staged by “crisis actors” with a gun control agenda, but perhaps the first with a huge audience of many millions made possible by social media. His income from spreading disinformation was estimated at $5 million a year in 2012 and 2013. He started out as an isolated crank who loudly proclaimed his theories about airport scanners and Bohemian Grove to a tiny audience via a small Austin public access channel. But 9/11 hate mongering built his base, and soon his guests included Donald Trump himself.

“My gut is, with the timing and everything that happened, this is staged,” Jones said about Sandy Hook in the massacre’s aftermath. “Your reputation’s amazing,” Trump gushed to Jones in 2015. One of the hoaxers inspired by Jones and others proclaimed, “I won’t be satisfied until the caskets are open.” The parents’ home addresses and financial information was made public.

Pozner went through the stages of grief after Noah, the youngest victim, went to his death in a Batman shirt and Spider Man sneakers. But when he was assaulted by threats from conspiracy threats, instead of retreating he mounted a determined and brave offensive—an incredibly successful one, as it turned out.

The book makes clear that the big social media sites, having profited from Sandy Hook disinformation, were agonizingly slow—until publicly and strategically embarrassed by Pozner and others—to remove the content from their sites. Meanwhile, the damage was being done. A 2013 Fairleigh Dickinson University poll found that “25 percent of Americans think that facts about the shootings at Sandy Hook elementary last year are being hidden and an additional eleven percent are unsure.”

These beliefs aren’t restricted to uneducated Americans. Some of the more dedicated conspiracy theorists documented in Sandy Hook were tenured, Ph.D-holding professors, two of whom lost their jobs because of their messaging.

A quote, “The wheels of justice turn slowly, but grind exceedingly fine,” applies in this case. The professors were fired. Alex Jones is still on, but now has a much smaller audience. He lost a number of civil suits filed against him by Sandy Hook families. Most recently, Jones was fined $25,000 a day for failing to appear at a deposition.

Did Jones actually believe that Sandy Hook was staged? It doesn’t matter. According to Williamson, the more provocative he got, the bigger his audience and the more lucrative his contracts to sell dietary supplements and health-related products like “Super Male Vitality” drops, “Lung Cleanse Plus Spray,” and “Prostaguard” pills.

Williamson makes the case that Sandy Hook misinformation set the scene for the January 6 insurrection, and the truth-denying and “alternative facts” that followed it. It’s a persuasive argument, though many factors are in play. Obviously, there were issues with having the news agenda set by large newspaper chains and a few television networks, but those organizations at least kept the more outrageous conspiracy theorists mired in small organizations such as the John Birch Society. Today, those views are in the mainstream and actively threatening democracy.