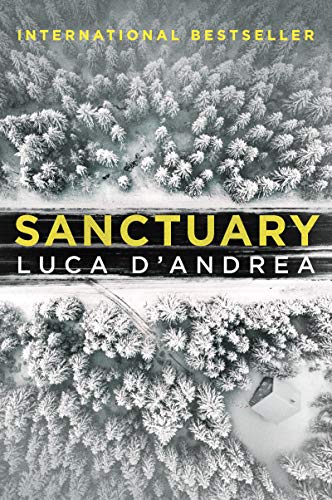 “Call it what you will—dark fantasy, magic realism, fabulism . . . D’Andrea’s writing a novel that’s not a typical thriller but much closer to the kind of fairy tale to which his characters are constantly drawn.”

Herr Wegener, a crime lord in the northern Italian region of Alto-Adige, becomes incensed when he discovers that his wife, Marlene, has broken into his safe, stolen a bag of priceless sapphires, and disappeared. A Nazi collaborator in his youth, he’s ruthless, possessive, and sociopathic, and he vows to track Marlene down, retrieve his jewels, and deliver to his wife the punishment he believes she deserves.

The incident, however, attracts the unwelcome attention of The Consortium, a crime syndicate Herr Wegener has long sought to impress. He’s instructed to contact a notorious assassin called The Trusted Man. When he confirms to the killer that he wants his wife murdered, Herr Wegener sets in motion a chain of events he cannot stop, even if he wanted to change his mind.

Marlene, meanwhile, has driven her car off the road in a remote area of the Dolomites, and her life is saved by Simon Keller, a hermit living alone in the remnants of a family farm in the mountains. Marlene recovers from her injuries under his care and admits to him that she’s pregnant with Wegener’s child, but can she rely on Keller to keep her whereabouts a secret? Or will The Trusted Man track her down and complete his contract?

Sanctuary is Luca D’Andrea’s second novel, following up on his debut thriller Beneath the Mountain. A resident of Bolzano, the capital city of the region in which this story takes place, D’Andrea demonstrates a considerable ability to use setting to establish not only atmosphere but also nonstop suspense. The landscape is as stunningly beautiful as it is dangerous and foreboding.

On the other hand, the characters are somewhat two-dimensional and tend to run to type. Herr Wegener is evil but fearful, The Trusted Man is sympathetic but deadly, Keller is kind but psychotic, and Marlene is flawed but strong. There’s a reason, however, that they’re less than completely realistic, and it has to do with the kind of story D’Andrea has chosen to tell.

Our primary clue lies in the battered copy of Grimm’s Fairy Tales that Marlene takes with her everywhere. There’s also the tendency for characters to tell other characters short illustrative stories with a moral at the end.

There are Keller’s Vulpendingen, a taxidermist’s nightmare in which body parts of various animals are mixed and matched into obscene parodies of nature: “Man is [God’s] Vulpendingen. His damned joke.”

There are constant references to Wegener as a malevolent kobold, pigs with the names of murdered people, and skulls under the floorboards in the cellar.

Call it what you will—dark fantasy, magic realism, fabulism—but we soon understand that D’Andrea’s writing a novel that’s not a typical thriller but much closer to the kind of fairy tale to which his characters are constantly drawn. If you choose to read this book—and read it all the way to the end—you must understand you’ll be reading it on multiple levels in order to appreciate in full what the author’s trying to accomplish.

It’s a difficult challenge. The stench of the pigs is palpable after a while, not to mention the pain suffered by D’Andrea’s various characters from lost limbs, wrecked knees, severed fingers, and so on. No wonder poppy seeds are in constant supply for their analgesic properties.

It is, indeed, a rather Grimm tale, the reading of which is not to be undertaken lightly.

However, Luca D’Andrea is an excellent writer who’s quickly making a name for himself, and Sanctuary is an excellent novel that will appeal to readers who like their thrillers dark, cold, and ominous.