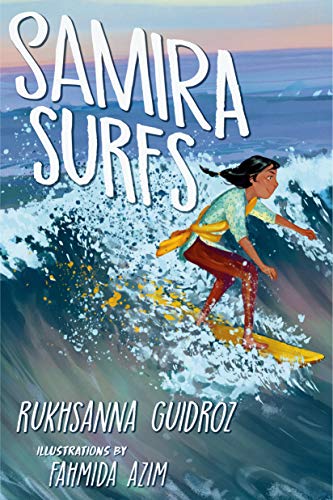 “Guidroz has created a strong, sympathetic heroine that readers can root for. Azim’s evocative black and white drawings bring the village of Cox’s Bazar to life and put the capper on what is already a terrific story.”

After fleeing Burma by boat, 11-year-old Samira and her family are settling into their new life in Bangladesh as Rohingya refugees. Samira helps support her family by selling hardboiled eggs on the beach at Cox’s Bazar, but she longs to attend school and learn. Unfortunately, her father believes that school is only for boys, like her brother, Khaled.

As Rohingya and Muslims, Samira’s family faced brutal persecution at home, but their life in Cox’s Bazar is scarcely easier. Undocumented refugees, they must live outside the official camp in a flimsy shelter with a tarp for a roof, hustling for enough money to eat. Bangladeshis resent the newcomers’ drain on local resources, and the family is still reeling from the loss of Samira’s grandparents on the perilous trip from Burma.

All this may seem rather dark and intense for a middle-grade book, but Guidroz handles it deftly, revealing Samira’s sad backstory in dribs and drabs as she negotiates her new life. This novel in verse teems with simple but beautiful poetic passages, like:

“A spiral of joy rose in my belly.

A bucket of eggs

Turns into bundles of taka

Turns into pinches of salt

Turns into mouthfuls of joy.”

As Samira slowly begins making friends with other refugee and Bangladeshi girls around her own age, she finds herself drawn to the ocean and the surfers. But her fears, kindled by the loss of her grandparents in the crossing, hold her back.

“Water can trick us.

It took my Nani and Nana

When we crossed into Bangladesh.

It draws more than a line on land.

It separates our old life

From our new life.”

According to Samira’s religion, she isn’t supposed to go swimming in the ocean now that she’s becoming a young woman, but she’s enticed by surfing despite her history and religion. When a surfing contest (girls invited!) is announced with a Tk. 10,000 prize, Samira has an epiphany. That money could help her family, which is just scraping by, and she could fulfill her undeniable longing at the same time.

I could learn to surf

Before the contest in six months.

My mind races with the daring

Of what could be.”

Helped by her brother and her surfer friends Maya, Aisha, Rubi, and Nadia, Samira begins learning the sport in secret. And at the same time, their shared goal brings the girls closer together in friendship. As the contest approaches, Samira’s secret becomes harder and harder to keep, particularly when Nadia’s resentful brother learns of it.

Ultimately, Samira must walk a fine line between honoring her family and following her dreams. In her, Guidroz has created a strong, sympathetic heroine that readers can root for. Azim’s evocative black and white drawings bring the village of Cox’s Bazar to life and put the capper on what is already a terrific story.