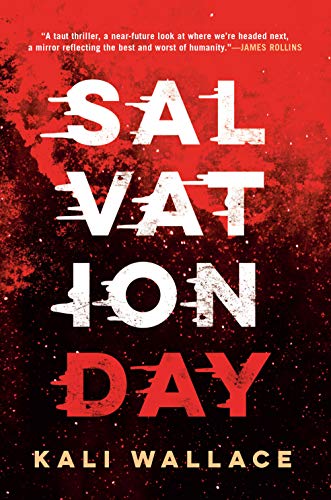 “Salvation Day is a terrific space thriller. Wallace is an excellent writer, and she maintains tight control over her story as it progresses.”

A community of outcasts leaves the North American desert to commandeer the massive exploration space vessel House of Wisdom, which has been parked in orbit around Earth for a decade. It was abandoned after a deadly virus wiped out everyone on board. The plan of their enigmatic cult leader, Adam Light, is to make the ship their new home in space, liberating them from the crushing oppression of the United Councils of Earth.

Zahra Lago leads a small advance team that seizes a shuttle and kidnaps a group of young scientists. Among their hostages is Jaswinder Bhattacharya, the sole survivor of the viral attack. Zahra’s team needs Jas’s genetic signature to penetrate House of Wisdom’s elaborate defense system so that they may assume control of the vessel and prepare the way for Adam and the refugees.

Their plan goes awry, however, when the team boards the spaceship and discovers all their advance information about the virus and the condition of the ship was wrong. Zahra and Jas soon find themselves in a terrifying battle for survival against a force they don’t understand, while Adam brings his transport ship filled with refugees closer and closer to a disaster none of them could have possibly imagined.

Salvation Day is Kali Wallace’s fourth novel and her first for adults. Her previous publications, Shallow Graves (2016), The Memory Trees (2017), and City of Islands (2018), were written for a young adult audience, falling into the paranormal, urban fantasy, and magic realism subgenres.

Salvation Day is an excellent space thriller that touches on a number of interesting themes. While Wallace’s point of departure is the Bad Things Happen in Space convention featuring an abandoned spaceship à la Alien/Aliens, she also explores the effects of cult psychology on vulnerable young people. The pressures exerted on Zahra and her advance team by Adam, and the control he exercises over the lives of 300 innocent people, play in effective counterpoint to the terror of the viral threat faced by the team on board the House of Wisdom.

Wallace also works with the timely subjects of immigration and citizenship, focusing on the unnecessarily rigid control of border entry and inclusion that a powerful and secretive government can exert over thousands of desperate outcasts. The refusal of the Councils to expedite citizenship for refugees from the North American deserts, an interesting mirror image of the current situation regarding people fleeing Middle Eastern deserts, has provided an opportunity for someone like Adam to take power and lead hundreds of helpless people on a quixotic pursuit of freedom.

Wallace tells her story from the alternating points of view of Zahra and Jas. Both are directly connected to the House of Wisdom. Zahra’s late father was a space archaeologist on board the ship who has been publicly blamed by the Councils for the outbreak of the virus, while Jas, the only survivor, had been in the company of his parents, who were both victims of the infection. His mother was an engineer who designed the powerful engines driving the spaceship, and his father was a botanist in charge of the agricultural zone that was once filled with greenery and food crops.

Both points of view are written in first person, and it takes a moment to adjust when the narrator switches from one to the other. It’s necessary to remind oneself that the rebel Zahra’s point of reference is her father’s apparent release of the virus while survivor Jas’s are a lost garden and his mother’s last-ditch efforts to defeat the infection.

It’s an effective way to tell the story, however, and it helps maintain the suspense as Zahra struggles with her team, and Jas attempts to keep his fellow hostages from becoming infected by the lurking menace.

Focusing on her two main characters, Wallace doesn’t do all that much with the others. In particular, Jas’s close friend Baqir and his bionic arm could have been developed much more. Baqir’s background and personality are intriguing, and his relationship with Jas would seem to have a lot of mileage left on it.

While the ending is a little cloggy and overwritten, and Wallace’s use of the f-word comes across as gratuitous at some points, Salvation Day is a terrific space thriller. Wallace is an excellent writer, and she maintains tight control over her story as it progresses. It moves well, with a consistent pace and rhythm, and she keeps us interested in her two protagonists throughout.

Whether you’re a fan of speculative fiction or you simply appreciate a well-written novel, Salvation Day should definitely be included on your summer reading list. You won’t be disappointed.