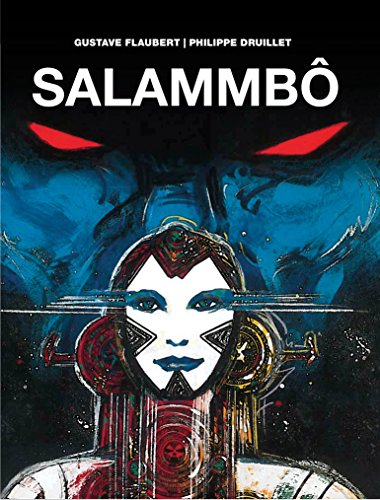 Salammbo is a woman of fiction who sprang to life from the pen of French writer Gustave Flaubert in 1862. She was a central figure in the book of the same name. Flaubert wrote Madame Bovary.  Salammbo was his second novel and was equally popular at the time as his first work. Salammbo, however, is now largely forgotten, as should be the graphic version of it, Lone Sloane Salammbo.

Salammbo herself was a near goddess. She has lived many lives since 1862. Since her first appearance, she has haunted operas both finished and unfinished, orchestral suites, plays, movies and even a computer game.

The source of her resilience is hard to quantify. In the 1862 book, she died of shock while witnessing the torture death of her lover, an act commanded by her father. This occurred at the end of the First Punic War, circa 300 BCE. Neither that war nor her name remain modern household terms. Her death, while perhaps dramatic, was less than inspiring. It is time to move beyond her fictional existence and a distant war in North Africa that has been eclipsed many time over in that locale.

Philippe Druillet is a historic master of the graphic novel and a respected visual designer. From the early 1970s to the mid-1990s he won many European awards for his creativity. During that period, he created his graphic character Lone Sloane, a dark space marauder. Like Flaubert, Druillet is French.

Druillet first married his character to Salammbo, in the literary sense, in 1980. Their progeny were three graphic novels based on the work of Flaubert. The last of the three was published in 1986. Druillet was also the designer of the computer game which featured Salammbo. It was produced in 2003 and called “Salammbo: Battle for Carthage.” Apparently the game was not well received outside France. It seems the reason for its limited appeal in the English speaking world was the perceived lack of significance of the Punic Wars and unfamiliarity with its historical figures. There is much the same problem with the current Salammbo rehash.

Lone Sloane Salammbo takes Lone Sloane and somehow morphs him into Mortho a Libyan leader in the Punic Wars. This is not an easy task. Lone Sloane is a murderous brigand fleeing his enemies in a space ship. He somehow time travels and dumps himself off into Mortho’s personae. He literally becomes Lone Sloane Mortho, the man tortured to death before Salammbo’s eyes.

After his death, Lone Sloane, now short the Mortho piece and but a burning shell, is beamed back up into a spaceship to be scientifically regenerated by his colleagues. Beautiful Salammbo is left dead back in North Africa to await regeneration in future prose, poetry and paintings. She has the unique afterlife experience of being fiction within fiction. Salammbo is part of a fictional opera in the Orson Welles film, Citizen Kane. Lone Sloane should have been so lucky.

The art in this English version of Lone Sloane has its color palate firmly anchored in the 1980s. It is bright, bold and confusing. Most panels looks like the previous one and the one yet to come. Machines and monsters of war are jammed together so tightly that they lose individual identity. One battle scene looks like another and battle scenes rule the entire production.

A clever creative exception is the artistic treatment of Salammbo herself. At times, she is a wonderful adaptation of her art nouveau self, painted by artist Alfons Mucha in 1896. At times, she is vaguely drawn, a wisp of a demi-goddess. Most strikingly, she is often a bit of photographic clip art, a nude young woman complete with bikini bottom tan lines.

The overall feel of the book is a simple re-do of the 1980 trilogy. The forward to the book by Druillet points in this direction. It is dated January 1980, in Livry, France. The award winning translator is Edward Gauvin. His website refers to a growing number of French graphic novels which are now “hitting the American market.” Sometimes you hit. Sometimes you miss. The current miss is not the fault of Gauvin, Druillet or Flaubert.

It is a matter of timing and the nature of the American literary graphic novel market. American popular culture does not include Flaubert, the Punic Wars, or female heroes who swoon and die of shock. Taking story boards such as this and sending them into deep space does not compete with the adventures found in the Marvel and DC universes.