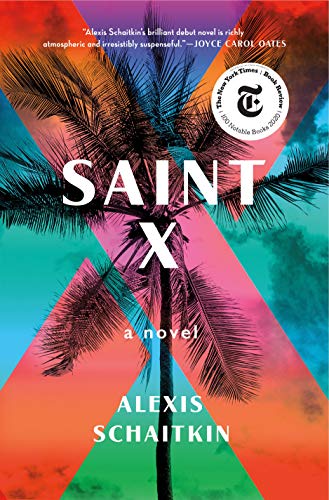 "Readers will gladly fall headlong into this brilliantly conceived novel."

Saint X received rave pre-publication reviews and deserves each and every one of them. What was the creative spark that birthed this deeply intelligent book?

In an Author's Note, Alexis Schaitkin describes her motivation for writing it, but the originality of the story and the way it's told goes far, far beyond mere inspiration. A rich cohesiveness of words on the page that brings the setting to life, and the profoundness and complexity of the character development makes this outstanding debut book noteworthy.

More on that later, but here's the story.

A privileged family goes on vacation to a tropical island. Father, mother, and two daughters, 18-year-old Alison and Claire, age seven. This concept is innocuous on its face, but the depth of description as it's laid out by the author gives effervescence to the story and everyone in it. Readers will see the island and later the characters in enthralling detail:

"Zoom in closer on Indigo Bay and the resort's features come into view. There is the long drive lined with perfectly vertical palm trees, the marble lobby with its soaring domed roof, the open-air pavilion where breakfast is served . . . the spa, the swimming pool . . . the fitness and business centers . . . There is the beach where lounge chairs are arranged in a parabola that follows the curve of the bay, the local woman set up on a milk crate beneath a sun-bleached blue umbrella at the beach's edge, braiding young girls' hair. . . .

"On the beach are families, the sand around their chairs littered with plastic shovels, swimmies, impossibly small aqua socks; honeymooners are pressed closely together beneath cabanas; retirees reading fat thrillers in the shade."

And here comes Alison sauntering to the water's edge, sullen, yawning, preoccupied, self-absorbed, silver ankle bracelet sparkling with each step, ignoring her parents, pretending not to hear when they speak to her:

". . . As she walks, heads turn—young men, openly; older men, more subtly; older women, longingly. . . . She wears a long, billowy tunic over her bikini, but she has a teenage knack for carrying it with a whiff of provocation . . . "

Within days, Alison's dead body is found in a secluded cay a mere five-minute boat ride from the hotel. Her murder throws the family into a maelstrom of unrelenting grief and results in a world-wide media frenzy. Readers will be put in mind of 18-year-old Natalie Holloway who disappeared on the island of Aruba in 2005.

". . . Alison was all over the news the winter she was killed, as Nancy and Tonya and JonBenet were during other winters around that time. (Nancy in all those crystals, glittering across the Lillehammer ice. JonBenet . . . sans makeup . . . her natural brown hair waving out of a cowboy hat, a red bandana around her neck.) News vans loitered on our suburban cul-de-sac for weeks. . . ."

Was it one of the young men who openly ogled her that first morning? Or maybe one of the older ones, like that guy wearing those embarrassing dolphin-patterned shorts who overdid his volleyball spikes and serves and slams because he knew she was watching? Or could it be his disapproving wife, or one of the other wives watching with judgmental scowls as their husbands showed off for her. How about that arrogant middle-aged actor or that blond boy who stopped by the family's chairs to chat. Could it have been that skinny guy her father noticed had his eyes on her?

Maybe it was one of the waiters, Edwin Hastie or Clive Richardson, the one they called Gogo. After witnesses report seeing them with Alison, they are arrested.

Then comes the final blow that shatters the family.

". . . The chief of police on Saint X called our house . . . he would be holding a press conference that next day, at which he would announce that all suspects in my sister's case had been cleared, and the department had concluded there was not sufficient evidence that Alison had died as the result of a violent crime to continue the investigation."

All that in the first 50 pages, then the story jumps years ahead to a grown up Claire, who in an attempt to escape the daunting, overwhelming grief of her sister's murder, changes her name to Emily and moves cross country to New York City after college. After one low-ent apartment in one low-rent neighborhood after another, she is unconsciously compelled to move to a community lovingly called Caribbean Flatbush. There she comes across taxi driver Clive Richardson, one of the men previously suspected of murdering Alison.

Emily does not immediately introduce herself. She was only seven at the time of the murder. Instead, she obsessively stalks him hoping to uncover the truth about what happened. Along the way, she discovers surprising secrets about her sister.

The absolute brilliance of this book and what keeps the reader reading is the way author Schaitkin put it together. She tells the story from a variety of viewpoints, sometimes in first person, sometimes third person, and even sometimes in omniscient POV, a sweeping "camera view" technique popular in the past, but rarely seen in books today. The result is a series of utterly fascinating detailed mini biographies of every character involved in any way in the murder. The reader gets to see what everyone is thinking and doing before, during, and after the event.

According to Schaitkin, the book was years in the making. "I wanted to tell a story that would bring the reader into the lives of tourists there on vacation and the people who live on the island and work at the resort," she said.

Readers will gladly fall headlong into this brilliantly conceived novel.