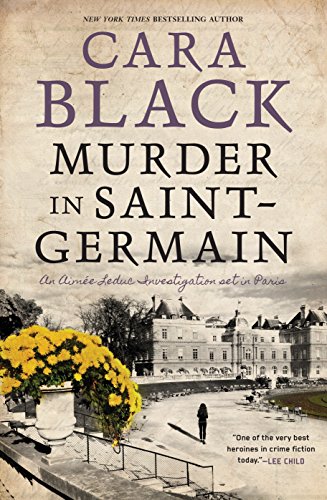 “a complex and seductive page-turner that will not disappoint devoted fans and casual readers of the New York Times bestselling series.”

Paris, July 1999: Private investigator Aimée Leduc is walking though Saint-Germain when she is accosted by Suzanne Lesage, a Brigade Criminelle agent on an elite counterterrorism squad. Suzanne has just returned from the former Yugoslavia, where she was hunting down dangerous war criminals for the Hague.

Back in Paris, Suzanne is convinced she’s being stalked by a ghost: a Serbian warlord she thought she’d killed. She’s suffering from PTSD and her boss thinks she’s imagining things. She begs Aimée to investigate. Is it possible Mirko Vladic could be alive and in Paris with a blood vendetta?

Aimée is already working on a huge case, plus she’s got an eight-month-old baby to take care of. But she can’t say no to Suzanne, to whom she owes a big favor. Aimée chases the few leads, and all evidence confirms Mirko Vladic is dead. It seems that Suzanne is in fact paranoid, perhaps losing her mind—until Suzanne’s team begins to turn up dead in a series of strange and tragic accidents. Are these just coincidences? Or are things not what they seem?

Murder in Saint-Germain is Cara Black’s 17th edition to her wildly successful Aimée Leduc mystery series and is her most exhilarating, unsettling, and complex escapade to date.

Each book in the series takes place in another area of Paris; this one takes place in the left banks Sixth Arrondissement of Saint-Germain-des-Prés. The quarter has several famous cafés that include the Les Deux Magots, Café de Flore, and the Brasserie Lipp. During the 1940s and 1950s, it was the center of the existentialist movement which is associated with Jean-Paul Sartre and Simone de Beauvoir. Saint-Germain is also home to the École des Beaux-Arts, the famed school of fine arts which is a setting for part of the story.

The latest installment of the Aimée Leduc series finds our heroine dodging villains while effortlessly balancing motherhood and her detective agency and scampering across rooftops, slithering through rat infested sewers. She finds herself entangled in two mysteries, one blackmail, the other a thorny plot involving a team in Bosnia and an allegedly dead murderer. As usual, Aimée’s sexiness is in full display as she fights crime and corruption.

As with all of Cara Blacks’ other novels in the series, it is a great joy to experience her obvious and on-going love affair with the City of Light. The stories in this mystery series are chockfull of spine-tingling adventure, and anyone who has ever visited Paris will find familiar sites within every chapter.

“In the early evening, Aimée stepped out onto the narrow street leading away from the Seine. The heat had barley cooled even as the shadows of the seventeenth-century building lengthened. No taxi in sight and a scorching three blocks to the Metro. Forget the bus with traffic at a standstill. Only a ten-minute walk if she hurried through Saint-Germain. But before she could even cross the street, the sky opened. Late July was nothing but heat, showers, and tourists here on the Left bank.”

Murder in Saint-Germain is another superbly sophisticated edition to the long running Aimée Leduc mysteries. Every moment of Aimée Leduc’s life is taken up with pressures and obligations. She is constantly dashing off to face the next challenge, and this makes for a fast paced and white-knuckle read. Overall, it is a complex and seductive page-turner that will not disappoint devoted fans and casual readers of the New York Times bestselling series.