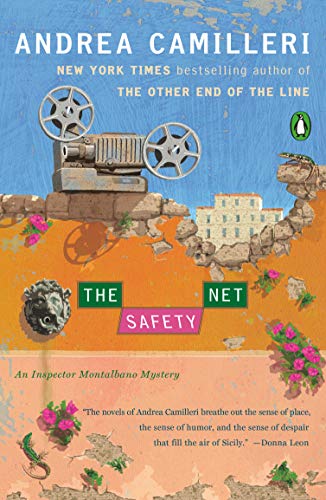 The crimes we commit in search of security and protection, for ourselves or our loved ones, are at the center of Andrea Camilleri’s latest Inspector Montalbano adventure, The Safety Net.

If you are not familiar with the Sicilian gourmet inspector, and like your cozy mysteries to be well-written, with well-developed characters and unpredictable, nuanced resolutions, then you’re in for a great time because there are worst ways to self-distance than to spend weeks reading the entire series of 25 books back to back.

If instead you’re an old fan, saddened by Camilleri’s death last year, you will certainly enjoy The Safety Net, find in it all the elements that made you return to it through the years.

Inspector Montalbano is as preoccupied with his food as he ever was, but here he is more subdued, more reflexive and mature, and shows his age by resolving two cases requiring more of his thinking and instinct, and less of his legal authority and experience.

“However hard he tried, no light came on in his brain. Maybe, with his increasing age, the old, incandescent bulb had been replaced by a new, low-energy one that took hours to reach full brightness.

This was an idea that until recently could be rather dangerous, as it could open the door to useless limitations over imminent old age. Now, however, that had changed, because having spent the whole evening talking to two intelligent lads had injected into his veins, as in some kind of vampiric transfusion, a minimal but sufficient amount of fresh, invigorating blood. And at that moment the phone rang.”

Yes, Montalbano (and Camilleri) are intent on saying some things about the new and the young: about social media and internet bullying, about the world of fast everything and the malady of teenagers always staring at their phones.

“Now, Montalbano more or less knew what they meant by ‘hot,’ but ‘rad’ was entirely new to his ears. And a wotsap was something he couldn’t even conceive.”

And yet everything is said organically, without diverting from the story. The tone is respectful, open-minded, as Montalbano grapples with the new, and attempts to understand and see value in all of the things that puzzle him. As usual, Camilleri just doesn’t preach when telling the story will serve just as well, or, as in this instance, even better.

Instead, Vigatta returns as the true main protagonist of the Inspector Montalbano books, as do Fazio, Catarella, and the incorrigible Mimí Augello, now married and with a teen son.

Livia also returns in the minor role of almost-wife turned eternal girlfriend by a man who cannot bear to put anyone, not even himself, above the job, and one must remember that though the story is set in modern times, it is still Vigatta, the small but charming, religious Italian town of Camilleri’s imagination.

“The first thing he did as soon as he got home was go and look inside the refrigerator. Adelina had prepared a platter of finger-lickin’ swordfish involtini, and there was a small frying pan containing a vegetable dish he also loved: boiled tinnirume of baby zucchini and their leaves.

He put the involtini in the oven to warm, set the pan of tinnirume over a lighted burner, and then went out to the veranda to set the table, because the evening deserved it.

During the entire meal he didn’t allow a single thought to stray from the subject of the fragrant delicacy of the tinnirume and the intense flavor of the swordfish, which certainly hadn’t come from the waters of the Baltic Sea.”

But for all the reflection going on in The Safety Net, there is also plenty of action with a school attack, a Swedish TV crew filming in town and upsetting the regular order of life by the sea, and with the mystery of a long-ago suicide that might just have been murder.

The rest is what The Safety Net, and really all Montalbano books, are about: community, good food, friends, family, and struggling with, but still managing to, do the right thing in the end.